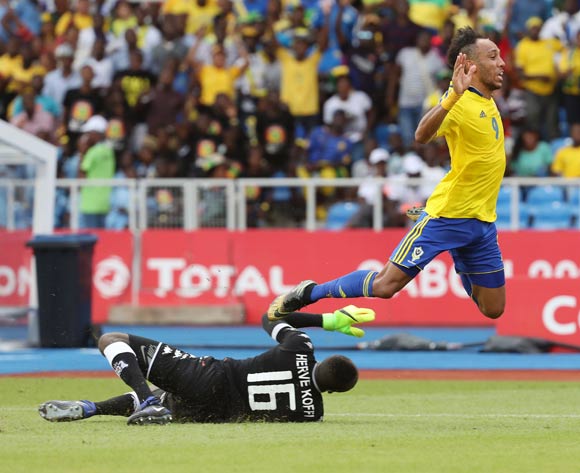 Hello and welcome to the live commentary of the 2017 Africa Cup of Nations Group A game between Gabon and Burkina Faso at Stade de l'Amitié, Libreville on Wednesday, January 18.

95' - Full-Time: Thank you for joining us for the Group A game between Gabon and Burkina Faso which ended in a 1-1 stalemate. The two sides have now recorded two consecutive 1-1 draws.

92' - Gabon have a chance to grab the winning goal from a free-kick, but Bouanga's delivery is poor.

85' - Diawara goes down in the Gabonese box and shouts for a penalty, but the referee Essrayri from Tunisia ignores him.

80' - Less than ten minutes left on the clock and both sides are pushing for the winning goal.

75' - Gabon sub: Kevyn replaces Poko, who has been lively for the Panthers.

65' - Manga does well to stop Stallions goalscorer Nakoulma, who has been thorn in the Gabonese defence thus far.

50' - The Panthers launch a quick counter attack through Aubameyang, but the striker's pass to Evouna is poor and the Stallions clear their lines.

46' - The second-half is underway here at the Stade de l'Amitié.

40' - Poko's cross finds his Gabon teammate Manga in the box, but the latter heads wide of the target as the Panthers look to take the lead.

35' - PENALTY! Burkina Faso keeper Koffi fouls Aubameyang in the box and the referee points to the spot-kick. Koffi is also booked.

32' - Gabon defender Obiang goes down injured and play is stopped as the player receives treatment.

30' - Gabon defender Poko makes a great tackle to stop goalscorer Nakoulma as we reach the half-hour mark and it remains 1-0 to Burkina Faso.

25' - The tournament hosts Gabon are under pressure now as the Stallions look to double their lead.

23' - GOAL! Nakoulma makes it 1-0 to Burkina Faso. The winger beat two defenders, before firing past Ovono.

20' - Both teams are searching for their first win of the tournament today after recording 1-1 draws in their first Group A games.

15' - GOOD SAVE! Burkina Faso forward Alain Traore forces Gabon goalkeeper Ovono into a good save - following a quick move by the Stallions.

13' - The Panthers of Gabon have enjoyed more possession thus far as they look to find the opening goal.

10' - Burkina Faso sub: Nakoulma comes on for Pitroipa, who twisted his ankle.

5'- Gabon are awarded a free-kick near the Burkina Faso box and Aubameyang steps up and fires over the crossbar.

1' - The match is underway here at the Stade de l'Amitié.

The last time Gabon and Burkina Faso met was in 2013. The Stallions of Burkina Faso beat Gabon's Panthers 1-0 thanks to Prejudice Nakoulma's goal in the 2014 FIFA World Cup qualifier played in Ouagadougou.