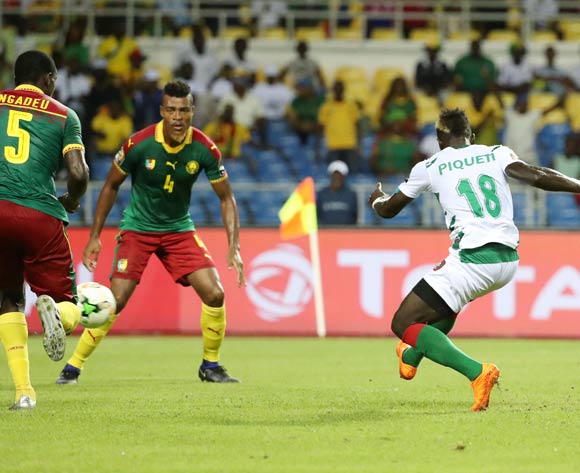 Good evening and welcome to our live coverage of the Group A 2017 Africa Cup of Nations clash between Cameroon and Guinea-Bissau from the Stade de l'Amitié in Libreville, 18 January.

Victory moves the Indomitable Lions top of Group A - they next face Gabon on Sunday with Guinea-Bissau to take on Burkina Faso.

90'- Four minutes added to the second-half.

80'- Into the final 10 minutes of the clash and Guinea-Bissau are now forced to chase the game with Cameroon in the driving seat.

78'- GOAL! Ngadeu-Ngadjui fires  Cameroon into the lead. His rasping effort creeps in at the near post.

60' - SAVE! Ondoa called into action once more - this time to deny Camara from range.

50'- Both coaches have made a chance apiece with goal-scoring Piqueti sacrificed by Djurtus - the midfielder looked to be nursing an injury at half-time.

43' - MISS! Unmarked and with time in the area Aboubakar somehow scuffs his attempt! Unbelievable miss by the burly forward.

42'- SAVE! Ball falls to Moukandjo on the edge of the area, but Jonas is well positioned to make an easy save.

40' - Five minutes remaining in the first half and Cameroon growing ever more frustrated as Guinea-Bissau continue to probe on the counter attack.

34'- CHANCE! Teikeu rises highest from a corner-kick, but he connects poorly with his resulting header attempt.

30'- Half-hour played and still its Guinea-Bissau who hold a slender lead. Cameroon, though, have dominated proceedings since the goal but to not avail just yet.

26'- SAVE! Jonas with a good save at his near post to keep out N'Jie's stinging volley attempt.

20'- African minnows Guinea-Bissau hold a surprise early lead through Piqueti. As expected, Cameroon flooding forward in an attempt to hit straight back, but Djurtus standing their ground.

13' GOAL! Unbelievable individual goal by Piqueti! The midfielder charges from well within his own half before cutting in field and hammering an unstoppable right-footed shot into the roof of the net.

12'- BLOCKED! Guinea-Bissau get numbers behind the ball to keep out Cameroon's attempts. Brave defending by the minnows.

9' - Toni Sliva threatens down the right flank before sending a cross-cum-shot straight down the throat of Ondoa who makes an easy save in the end.

5'- Even start to the encounter with the first corner-kick of the match falling to Guinea-Bissau. Cameroon a bit shaky defending the set-piece and Djurtus will certainly take confidence from that.

- Teams out on the pitch. Vincent Aboubakar returns for the Indomitable Lions starting line-up following his suspension. National anthems to be followed by kick-off.