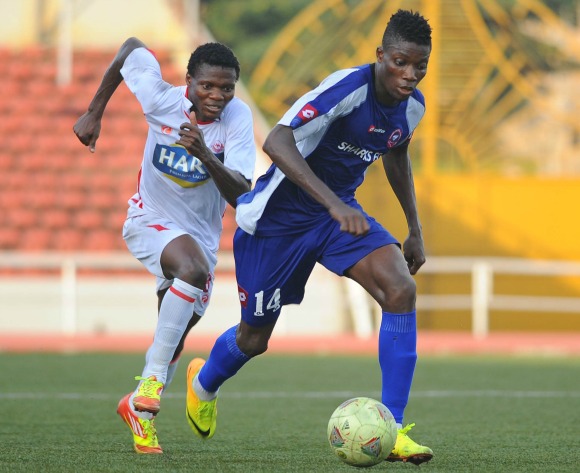 Fortune Omoniwari goes for goal in his days at Sharks

Four strikers are already firing at full blast at the start of the new NPFL season – Godwin Zaki, Mohammed Mohammed, Fortune Omoniwari and Golbe Elisha - have all scored two goals in as many matches thus far.

Zaki has made an instant impact in the championship after he followed up with his goal at champions Rangers on the opening week of the league by also hitting target against Katsina United for high-flying Abia Warriors.

Ironically, he would have joined Rangers this season but he was not considered good enough by coach Imama Amapakabo.

ABS striker Mohammed Mohammed has returned to his parent club in style after a loan spell at relegated Heartland.

He scored in his team’s first game of the campaign as they outscored Akwa United 3-1 at home, before he scored again in a 1-1 draw at Niger Tornadoes.

Former Akwa United centre-forward Fortune Omoniwari has already settled in at Rangers after bagging two goals in two games for ‘The Flying Antelope’.

He scored on his debut at home to Abia Warriors and hit target again to rescue a point for the champions at Nasarawa United.

And at table toppers Plateau United, the name on everyone’s tongue is Golbe Elisha.

He has proved to be dead ball specialist after netting twice from free kicks in the two matches played by ‘The Tin City Boys’.