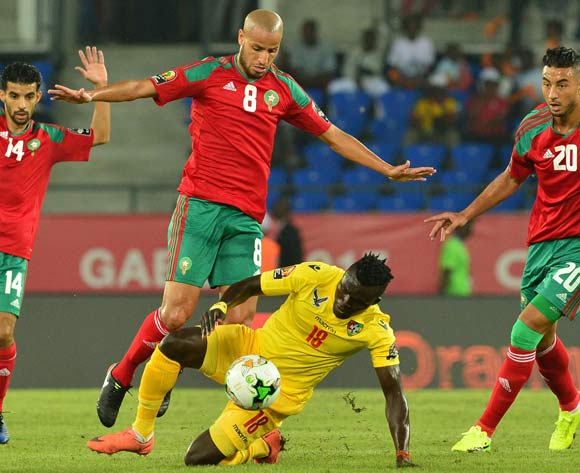 Lalawele Atakora of Togo challenged by Mbark Boussoufa, (l) Karim Aroussi El Ahmadi, (c) and Aziz Bouhaddouz of Morocco during the 2017 Africa Cup of Nations Finals match between Morocco and Togo at the Oyem Stadium in Gabon on 20 January 2017 ©Samuel Shivambu/BackpagePix

Good evening and welcome to the live coverage of the Group C 2017 Africa Cup of Nations clash between Morocco and Togo from the Stade d'Oyem in Oyem on Friday, 20 January.

90+3' - Full-Time: Morocco 3-1 Togo. The Atlas Lions next face the Ivory Coast on Tuesday while the Sparrow Hawks will take on the Democratic Republic of Congo.

81'- CLOSE! Ayite with a weaving run into the box, but unlucky for the midfielder as he could only succeed in directing his resulting shot wide of the mark.

72'- GOAL! The change does the trick for Herve Renard as En-Nesyri hammers home a left-footed shot from range - poor keeping, though, it should be said.

67'- Togo struggling to find a way out of their half with Morocco pressing as a team, working very hard as a unit as they aim to hold onto their lead.

60' - Hour played in Oyem as Togo still probe for the equaliser. More cagey the second half thus far, but chances are still forthcoming.

55'- Morocco dominated the early exchanges once more, but its Togo who go close as Adebayor sends his header attempt over the crossbar.

49'- Free-kick played into the area by Togo, but Mohand is quick off his line to gather with danger lurking.

46'- The second half is underway

41' - CLOSE! Mbark Boussoufa lets fly on the volley attempt but a timely block denies the midfielder.

35' - Ten minutes remaining in what has been an exciting clash thus far. Morocco hold the upper hand at the moment having fallen a goal behind after just five minutes.

28'- CHANCE! Agassa all lover the place as he again misjudges a cross - lucky not to be punished by Dirar!

24' - SAVE! Mohand with a diving save to deny Adebayor the equaliser! Former Arsenal, Spurs and Manchester City man causing Benatia and Co all sorts of problems.

21'- GOAL! Romain Saïss puts Morocco 2-1 up! Again a set-piece, this time its the Wolves man with the decisive touch, what a start to the game.

20' - Time just flying by in Oyem in what has been a very exciting game thus far.

14' - GOAL! Togo's joy short-lived as  Aziz Bouhaddouz pulls the Atlas Lions level from a corner-kick. Agassa nowhere to be found as the Moroccan forward is left with an easy finish.

13' - Perfect start to the game for Togo who continue to press forward through Adebayor. The veteran still showing plenty of energy in attack.

6'- Morocco had dominated possession from the kick-off, but with their first attack the Sparrow Hawks strike! Ayite with the decisive pass to Dossevi who finishes with aplomb.

5' - GOAL! Dossevi opens the scoring for Togo following a thrilling counter-attack - ignited from well within their own half.

- Teams are out on the pitch, anthems have been sung and we are ready to go!