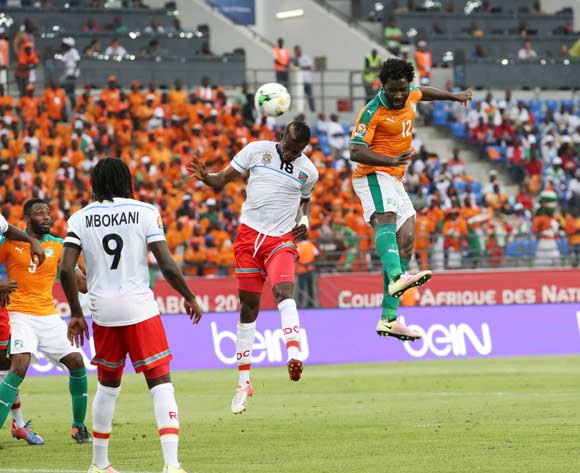 Ivory Coast and Democratic Republic Congo (DRC) drew 2-2 in their 2017 Africa Cup of Nations (AFCON) match which was played on Friday evening.

DR Congo remain at the top of Group C standings, while defending champions Ivory Coast move up to second following the game which took place at the Stade d'Oyem.

It took only 10 minutes for Neeskens Kebano to fire DR Congo into the lead with a wonderful strike making it 1-0 to the Leopards.

Wilfried Bony, who was making his first start in the tournament, levelled matters for the Ivory Coast with a decent header in the 26th minute.

However, Junior Kabananga had other ideas as he restored DR Congo's lead in the 29th minute and the Leopards were leading 2-1 during the half-time break.

It was nearly 3-1 to DR Congo twenty minutes after the restart, but Ivory Coast goalkeeper Sylvain Gbouhouo snatched the ball before Dieumerci Mbokani could pounce.

But the Elephants did find the equalizing goal they had been looking for in the 67th minute as Serey Die scored with a deflected shot to make it 2-2.

Salomon Kalou thought he had scored the winning goal in stoppage time, but he was ruled offside and ultimately, the match ended in a 2-2 draw.