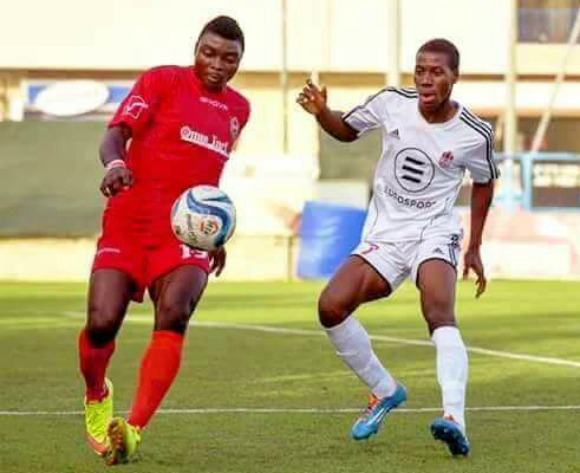 Godwin Zaki (left) in action in Europe. He is now back in the NPFL

Abia Warriors striker Godwin Zaki has revealed his two goals in as many matches in the NPFL have boosted his self-belief as he tries to get his career back on track after stints in Malta, Cyprus and Finland.

Zaki opened his NPFL goals account on the opening day of the new season after Abia Warriors upstaged champions Rangers 2-1 in Enugu.

He doubled his personal tally in midweek as the Umuahia club turned back Katsina United 2-0 at home.

“I am so happy that I have scored in my first two matches. This has given me the much-needed confidence,” said the big striker, who also trained with Rangers in pre-season in Benin City, but was not offered a contract.

The 22-year-old former Lobi Stars forward said he returned to the country after his contract in Cyprus was not renewed.

“I came back to Nigeria from Cyprus after my contact expired,” he opened up.

“I have also played in Malta and Finland and I was in Norway for trials but the deal did not go through.”