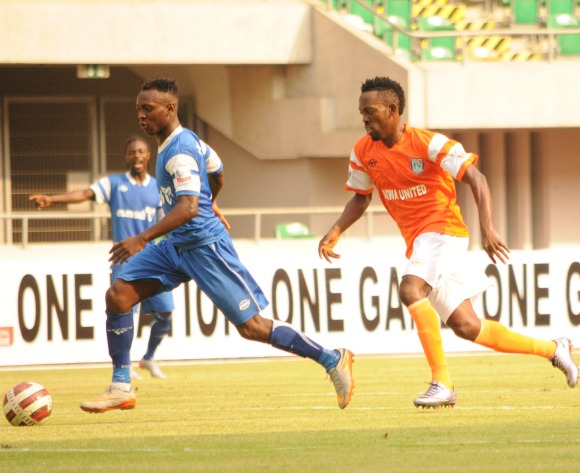 Akwa United coach Abdu Maikaba has maintained his club did not play to their gallery against Rivers United, saying their attractive passing game was to ensure they kept possession and from there hurt the other team.

Maikaba’s start to life as Akwa United’s coach has been anything but straightforward as he has failed to mastermind a victory in his first two attempts.

United lost 3-1 away from home to newly-promoted ABS FC, before dropping two points at home in a 1-1 draw with Rivers United in midweek.

Some sections of the home support visibly expressed their frustrations at the result and performance of their side on Wednesday with a few claiming that their beloved team was ‘playing to the gallery’.

However, Maikaba said the fans must be patient and believes the players will soon embrace his philosophy of intricately building up attacks with purposeful play from the rear.

“We did not play to the gallery against Rivers United. We cannot just lump balls forward in the name of trying to attack our opponents,” he argued.

“It is important to keep possession because the ball is the weapon.

“I will never be an apostle of the kind of football that sees a team lump balls aimlessly forward.

“I will keep preaching my philosophy to my players because I believe that with time, they will catch up with it.”

Today, the coach will lead his new club against his former club Wikki Tourists in Bauchi.

“I will keep it (the advantages of being a former Wikki coach) to myself because it is purely tactical,” he said ahead of the match.

“Besides, if I talk about it now, it will be all over the media and I do not want that.”

Akwa United currently occupy 18th place on the NPFL standings with a solitary point from their first two matches.