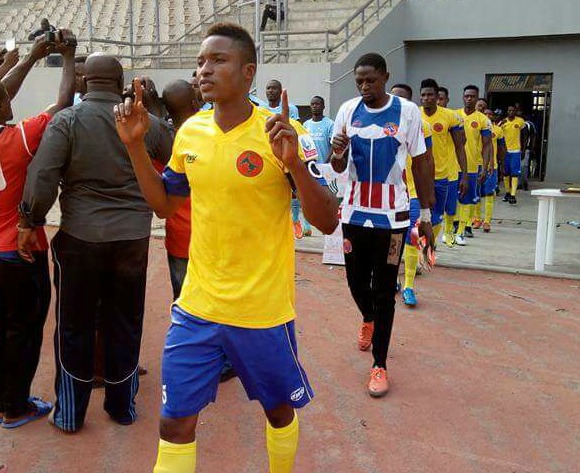 ABS FC centre-back Chinedu Ajanna has told AfricanFootball.com his promoted team will contend for the top prize in the Nigeria Professional Football League (NPFL) this season.

Ajanna, a no-nonsense defender whose role model is Real Madrid's Sergio Ramos, has therefore urged the team’s fans to always support them as they will strive hard to make them proud.

He talked about his career and more in this interview with AfricanFootball.com

Name the clubs you have played for?

I started with Kwara Football Academy from where I joined Bukola Saraki FC (Now ABS). I then moved to Kwara United before I returned to ABS.

How do you feel to be part of the team who brought the team back to the top flight league?

I am happy with the achievement because that was our target when the season got underway. Thank God we achieved it. I was the assistant captain, but led the team as the captain because the captain was not playing.

What are your targets for this season?

To be a better player, contribute my quota to see that the team do well in the league and set a new record.

Yes, we haven't won the league before and I think winning it this season is not beyond us.

Do you really believe ABS FC are contenders just fresh from the second-tier NNL?

Yes of course, we are in the league to contest for the title, not to just play in it. We have good players, knowledgeable coaches, sound management and great fans. We are unbeaten in first three games, though the season is so young but we will keep the momentum.

Who is your role model?

That is Sergio Ramos. I love his zeal, dedication. I love the way he play and score goals too.

What can you say about the NPFL?

It's a great league, growing every season and it can only get better.

What is your message to the fans of ABS FC?

I want to say thank you to them for their love and support. They should keep supporting us as we need them to achieve our goals. We will keep doing our best, we will not to let them down.