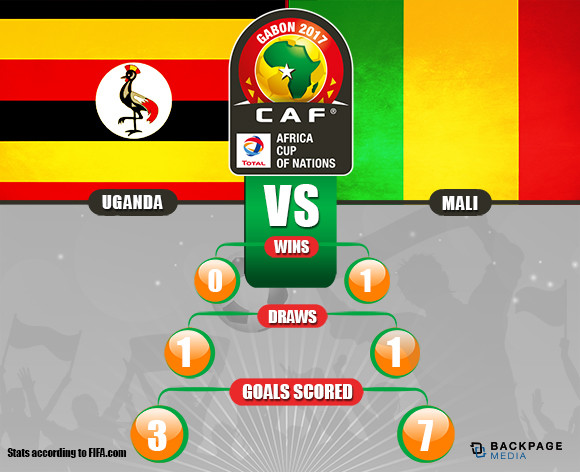 Hello and welcome to the live commentary of the 2017 Africa Cup of Nations Group D game between Uganda and Mali at the Stade d’Oyem on Wednesday January 25.

Both sides have exited the tournament. Uganda are placed at the bottom of the group whilst Mali finishes at number three.

90' Yatabare received a long pass from deep in midfield, his idea was goo, but was let down by his execution as the ball went over the cross bar. Uganda 1-1 Mali

85' We are in the last five minutes of this tie. As it stands, both sides will pack their bags and head home.

A set piece for Mali in a good position for the Eagles. Bissouma takes a brilliant strike and he beats Odongkara from his top right corner. Uganda 1-1 Mali

Uganda finally takes the lead through Miya. The forward unleashed a powerful shot from away from the box. Uganda 1-0 Mali

68' Uganda scores through Mawejje, but it won't stand as the offside flag has been up. Uganda 0-0 Mali

66' Stable defence by the Cranes as they absorb pressure from the Eagles. Aucho taken to receive treatment after a collision.

61' Bissouma toying with his opponent. Walusimbi, on the right. No goals in this encounter and we are in the final 30 minutes.

59' Uganda substitution: Oloya off, Mawejje on.

50' Marega tries to make a cross on the right flank, it goes out. Goal kick for the Cranes. Wasswa concedes a corner but Odongkara collects.

40' We are into the last five minutes of the first half and there are no goals at Stade d'Oyem.

36' Good work by Iguma to stop Doumbia in the box, the Malian forward made a brilliant run into the penalty area.

30' Set piece for Uganda, it is poor and is cleared. They launch another attack and get a corner.

25' Shot from range by Yacouba Sylla misses the top corner with inches after a sweet lay off from the right flank.

20' Fouls in the middle of the park from both sides as the battle for possession goes on. Good run by Miya into the box, but the ball is stuck in the water/ground. Uganda 0-0 Mali

15' Odongkara has changed his gloves and comes out to collect a cross which was intended for Marega.

10' Mali try to penetrate the Ugandan defence, but Marega comes from a tight angle and hi attempt hits the side of the net. Miya with a long range effort, it is wide. No goals in the first 10 minutes.

05' Both sides struggling to string their short passes due to the wet surface. Mali enjoying the possession so far.

The pitch is partially water logged as it was raining at Stade d'Oyem, but it has stopped for now.

On the other hand, the Eagles of Mali will need a win desperately to progress to the next round, but will hope Egypt lose to the Black Stars of Ghana in the other match at Stade de Port-Gentil.

The Cranes of Uganda are already out of the tournament as they have lost two matches to Egypt and Ghana respectively. For them it is all about playing to restore their pride.