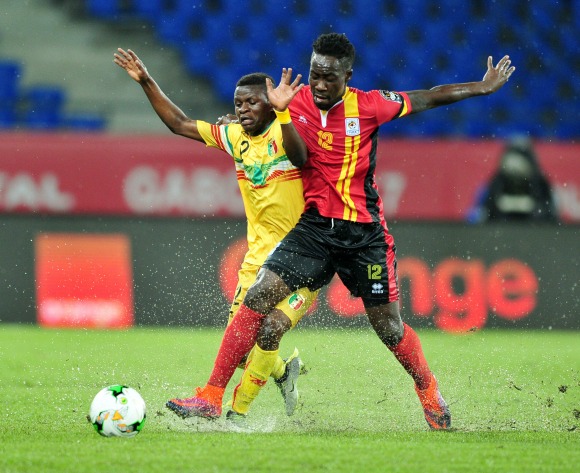 Although they scored first, Uganda failed to bag their first win as they drew 1-1 against Mali in their 2017 Africa Cup of Nations, Group D encounter at the Stade d'Oyem on Wednesday night.

The draw for Milutin Sredojevic's side leaves them sitting at number four in the group with one point after one draw and two losses following a 39-year absence at the tournament.

On the other hand, the Eagles managed to level the matters with Yves Bissouma's goal which came from a fine set piece.

The first five minutes saw both sides struggling to string their short passes together due to the wet surface, but the Eagles enjoyed the possession.

Following an attempt to penetrate the Ugandan defence, Moussa Marega came from a tight angle and his attempt hit the side of the net around the ten minute mark.

In an aim to respond a few minutes later, Miya tried a long range effort, but it went wide, not troubling goalkeeper Oumar Sissoko.

In the 25th minute, Yacouba Sylla missed the top corner by inches after a sweet lay off from the right flank.

Despite controlling the proceedings, Giresse's men failed to create clear cut chances as the score remained 0-0 at half time.

Although the West Africans showed urgency in the second stanza, it was Miya who put the Cranes in the driving seat in the 69th minute as he unleashed a rocket from a distance to beat Sissoko, 1-0.

However, four minutes later, Mali equalised when they received a free kick and Bissouma directed his well taken shot to the top corner, 1-1.

With one minute to go, Yatabare received a long pass from deep in midfield, his idea was good, but was let down by his execution as the ball went over the cross bar.

In the wake of the draw, Gresse's side are now placed at number three in the group with two points from two draws and one defeat.