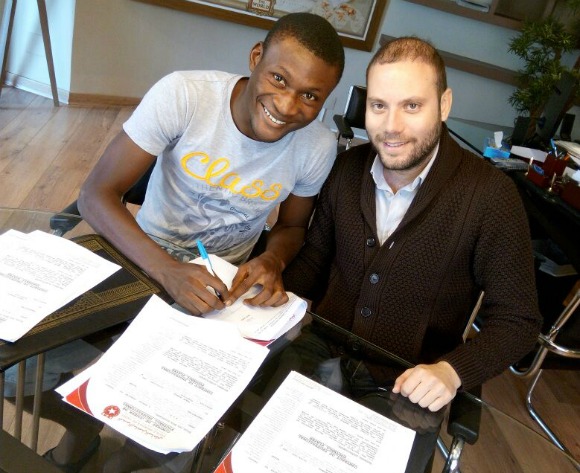 Obaje signs for Etoile du Sahel, but the Tunisian club later pulled the plug on the move

NPFL hotshot for last season Godwin Obaje has now settled for a transfer to cup winners FC Ifeanyiubah after his bid to move overseas failed.

“Obaje has joined Ifeanyiubah after he could not secure a foreign deal,” a top source informed.

Obaje was the NPFL Goal King last season after he scored 18 goals for Wikki Tourists.

However, several advertised moves to foreign clubs thereafter fell through.

He was first at top Russian club Spartak Moscow and it was understood he failed a medical there.

He then moved to Etoile du Sahel and appeared to have signed a long-term deal only for the Tunisian club to later pull the plug on the transfer without any explanation.

Obaje was also at another Tunisian team, Club Africain, who did not seem impressed with the striker after some drills.

He could also not pursue reported interest in Turkey after the agent suddenly stopped his contact with the Kaduna-born striker.