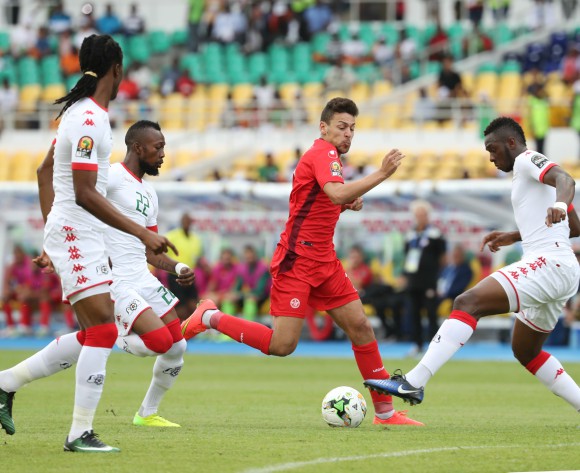 The Carthage Eagles of Tunisia have exited the 2017 Africa Cup of Nations in the quarterfinals after losing 2-0 to Burkina Faso on Saturday evening at the Stade d'Angondjé in Libreville.

Two quick second half goals that were netted by super substitute Aristide Bance and Prejuce Nakoulma ensured they are through to the next round.

On the other hand, the defeat for Henryk Kasperczak's men means the Carthage Eagles are out of the tournament and will now be heading home.

Despite pressure on the Tunisians and a great start for the Burkinabe in an aim to find an early goal, the Carthage Eagles managed to clear their lines.

In the 15th minute, a header from Yassine Khenissi resulting from a corner nearly broke the deadlock as it went inches wide.

Four minutes later, Khenissi produced another fine header from close range, showing his aerial strength after a wonderful cross from Naim Sliti, but the header sailed wide once again.

Towards the half-hour mark, Bertrand Traore tried to break the deadlock with a delightful curler towards the top corner, but it went over.

Despite pressure from the Stallions, the Tunisian defence stood firm to break down attacks launched by Nakoulma and Bertrand Traoroe.

It took the West Africans 81 minutes to find an opener after they received a set piece on the edge of the area and Bance found the back of the net.

With five minutes to go, Nakoulma made it 2-0 as he received a long clearance from a corner and he outran the defence.

Keeper Mathlouthi came off of his line to clear the danger, but was easily beaten by the striker as he slot it home.

The win takes the Stallions to the semi-finals of the biennial tournament as Paulo Duarte's men could face Egypt or Morocco in the semi-final on Wednesday.