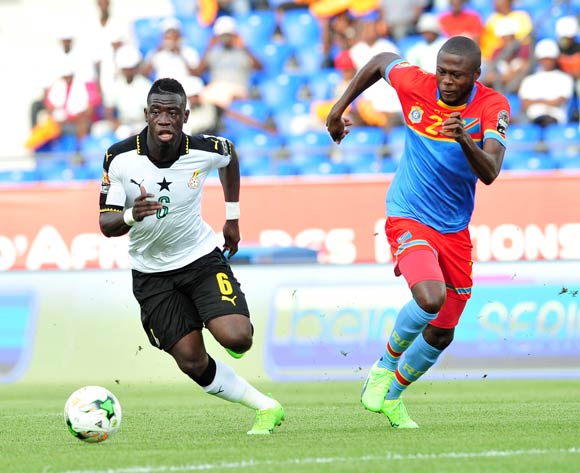 Hello and welcome to our live coverage of the 2017 Africa Cup of Nations quarterfinal clash between the Democratic Republic of Congo and Ghana, from the Stade d'Oyem in the Gabonese city Oyem on Sunday, 29 January 2017.

87' - Double chance for Bakambu! First he misses a sitter before Razak  makes a good save to deny the Spanish based forward.

85' - Into the final five minutes and Ghana look to be on their way to yet another final four showing as Ibenge throws on all three his substitutes.

78' - GOAL! Andre Ayew keeps his cool from 12 yards as he fires past Matampi! Referee left with little choice, but to point to the spot following a foul on Atsu by Lomalisa who is lucky not to receive his marching orders.

74' - Amartey (Ghana) the latest to go into the book as tension boils over in Oyem.

68' - GOAL! STUNNER! DR Congo alert as they take a free-kick quickly - catching Ghana off guard - before M'Poku unleashes a right-footed rocket past Razak.

63' - GOAL! Brilliant by Jordan Ayew! Wakaso wins back possession - feeds the Aston Villa man who brushes off Bope before curling the ball into the back of the net.

61' - Tisserand (DR Congo) the next to go into the referees book following a silly challenge on Partey.

55' - Exciting start to the second with Ghana growing into the game - Avram Grant's men look a different team in the second-half.

50' - SAVE! Matampi saves with his feat to keep out Wakaso's dipping free-kick. Really positive start to the half by the Black Stars.

47' - Better by Ghana as Andre Ayew makes some space for himself before directing his rasping effort on goal. Easy, though, for Matampi.

46' - Second-half is underway in Oyem

45' - Ball whipped into the far post, Mbemba gets up well but he is unable to direct his header attempt on goal.

39' - SHOT! Mbokani tries his luck on the half-volley, Razak parries, but recovers well to gather with the Leopards ready to pounce.

35' - Set-piece wide left whipped into the area by M'poku, but the Black Stars not really troubled as the ball is cleared by the first man at the near post.

30' - Ghana just about clear their lines as The Leopards enjoy a spell of pressure. Some respite as Razak lines the ball up for a goal-kick.

26' - SHOT! Mbokani sets up Kabananga on the break, but the in-form forward blasts well over.

25' - Successive corner-kicks for Ghana as they get into their rhythm. Kabananga with a good tackle to stop a flying Acheampong in his tracks.

20' - Neither defensive line really tested with much of the action in the middle of the park. Pitch is also holding up nicely with the rain having thankfully stayed away.

17' - Nothing to write home about since that glaring miss by Mbokani who will be kicking himself if DR Congo fail to advance.

9' - M'Poku looks up and fires a shot at goal from the edge of the area, Razak with an easy save as the attempt lacks any real power.

7' - POST! Defensive blunder by Afful lets in Mbokani who rounds Razak, but the burly forward can only succeed in striking the woodwork! Golden chance squandered.

- Teams about to enter the pitch, national anthems will be followed by kick-off. Game is set to get underway at 18h00 CAT.

- No real surprises with Asamoah Gyan the most notable absentee. The Black Stars captain starts on the bench having injured his groin in defeat to Egypt. Gyan, though, could well rise from the bench if needed - in so making his 100th appearance for country.