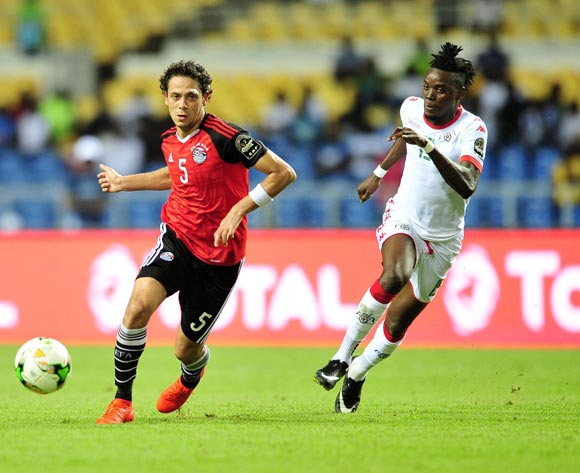 Ibrahim Salah of Egypt (l) challenged by Bertrand Traore of Burkina Faso (r) during the 2017 Africa Cup of Nations semi final match between Burkina Faso and Egypt at the Libreville Stadium in Gabon on 01 February 2017. EPA/Samuel Shivambu

Hello and welcome to the live commentary of the 2017 Africa Cup of Nations semifinal game between Burkina Faso and Egypt at the Stade de l'Amitieon, Wednesday February 02.

They will now take on the winner between Ghana and Cameroon in Sunday's final, while the Stallions face the losing team in the third-place play-off on Saturday.

Thank you for joining us for the semi-final game between Burkina Faso and Egypt which was won by the Pharaohs on penalties.

End of the game: Burkina Faso 1-1 Egypt. A penalty shootout to follow.

120' - The fourth official has added one minute.

115' - Alain Traore has a chance to win it for Burkina Faso from a free-kick, but it is blocked by the Egyptian wall.

110' - Bertrand Traore tries to dribble past Fathy, but the latter makes a good tackle to stop the Burkina Faso attacker. Less than 10 minutes left on clock.

105' - Alain Traore tries to make an immediate impact, but the Burkina Faso forward's cross goes wide of the target.

100' - Egypt are now pushing forward in numbers as they look to take the lead for the second time tonight.

95' - Bance tries to beat El-Hadary at the near-post, but his low shot goes wide of the target. Burkina Faso continue to press Egypt.

91' The first-half of extra-time is underway.

93' - GREAT SAVE! El-Hadary pulls off a great save finger-tipping Diawara's effort over the crossbar. The 44-year-old keeper has been in top form tonight.

85' - Egypt sub: Sobhi comes on for Trezeguet. That's the second change for the Pharaohs.

82' - GREAT SAVE! Nakoulma beats his marker, before forcing El-Hadary into a great save at his near-post. The Stallions are pushing for the winning goal.

75' - Bance controlled the ball beautifully in the Egypt box, before firing home - beating El-Hadary in the process. Game on!

70' - Less than twenty minutes left on the clock for the Stallions to find the equalizing goal.

66' - Kahraba set-up Salah, who unleashed a good curling shot into the back of the net - beating Koffi hands down.

60' - Razack Traore plays a low cross into the Egypt box and El-Hadary gathers the ball with ease. But the Burkina Faso attacker goes down injured afterwards.

55' - CAUTION: Kahraba is booked. That's his second consecutive yellow card and he will miss either the third-place play-off or final.

50' - The Stallions are still doing most of the attacking against the Pharaohs, who are too defensive.

49' - GOOD SAVE! Bertrand Traore forces El-Hadary into a good save from a free-kick.

46' - The second-half is underway here in Libreville.

45' - The fourth official has added one minute.

40' - Burkina Faso have a chance to take the lead from a free-kick, but Bertrand Traore fires over the crossbar.

35' - Egypt keeper El-Hadary is called into action as he gathers Bertrand Traore's shot from outside the box. The Pharaohs are sitting too deep.

30' - Stallions forward Bertrand Traore's free-kick is cleared away as Burkina Faso continue to push for the opening goal.

25' - It remains goalless here in Libreville as we approach the half-hour mark. The Stallions have been the better side thus far.

20' - The Pharaohs of Egypt are struggling to penetrate the Stallions defence, who are led by Bakary Kone of Malaga in Spain.

15' - Bance, the Burkina Faso striker, tries his luck from range and his attempt goes wide of the target without troubling El-Hadary in Egypt goal-posts.

10' - The Stallions of Burkina Faso have started lively as they look to grab an early lead. El-Hadary has been kept very busy in the Egypt goal-posts thus far.

5' - Burkina Faso forward Razack Traore forces Egypt goalkeeper El-Hadary into an easy save with a shot from outside the box.

1' - The match is underway here in Libreville.

Both teams are on the pitch as kick-off approaches.

Burkina Faso and Egypt booked their places in the semi-finals after defeating Tunisia, and Morocco respectively in the quarter-finals last weekend.