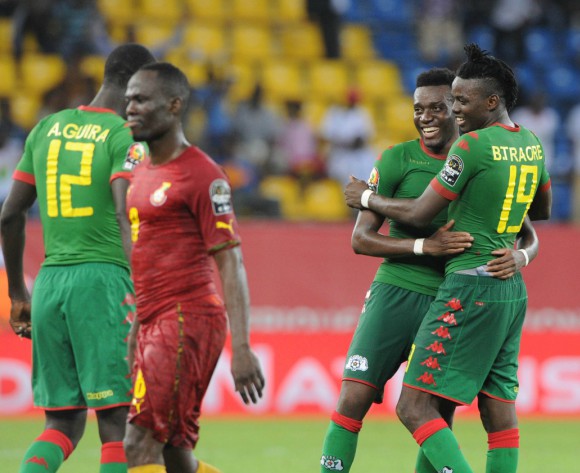 The Black Stars of Ghana have failed to finish at number three as they lost 1-0 to Burkina Faso in the 2017 CAF Africa Cup of Nations third/fourth place match at Stade Port-Gentil on Saturday night.

Ghana had a bright start in the first five minutes and Agyemang Badu missed a header from close range after a great cross from the left, as the Burkinabe were still asleep.

Despite Stallions' failure to ignite in the opening stages of the encounter, it was Alain Traore who tried a long curling shot from a set piece in the 13th minute, but goalkeeper Richard Ofori collected with ease.

Four minutes later, Paulo Duarte' men took another shot through Aristide Bance as he beat his man, but his shot went wide.

The Ghanaians were awarded their first corner in the 26th minute and the ball fell for Thomas Tekpetey in the box: he hit the upright and Kouakou Koffi managed to punch the rebound away from danger.

With five minutes remaining in the first half, Prejuce Nakoulma produced a great run, beating three defenders in the box, but his final shot was disappointing as it went wide from the right of Ofori's posts.

With one minute to the hour mark, Jordan Ayew delivered a brilliant set piece from the right wing into the box, only for Tekpetey to see his strong header going inches over the crossbar.

In the last 12 minutes, the match opened up as Ofori produced a sweet save to deny Cyrille Bayala resulting from a brilliant counter attack. The keeper parried the shot away and the rebound was off target by Alain Traore.

However, with two minutes to go, Traore produced a fantastic finish from a set piece on the right flank. He curled his shot to the far corner, beating Ofori.

In the last minute, Jonathan Mensah pushed forward to pull one back for Avram Grant's men, but was denied by keeper Koffi, who punched the ball to concede a corner.