Nyom: Tell Broos I have no AFCON regrets 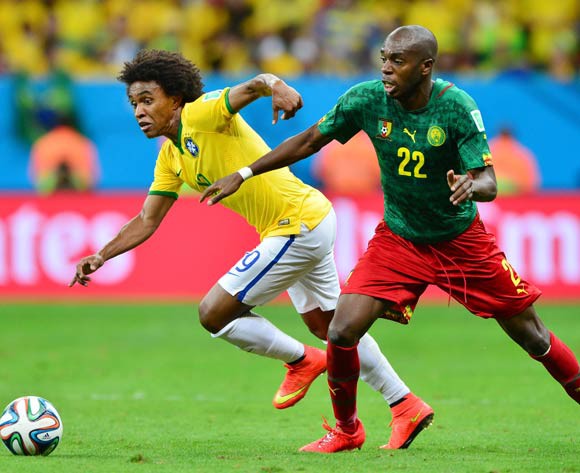 Willian of Brazil gets past Allan Nyom of Cameroon during the 2014 Brazil World Cup Final Group A football match between Cameroon and Brazil at the Estadio Nacional Brasilia, Brazil on 23 June 2014

After turning down an offer to represent Cameroon at the 2017 Africa Cup of Nations in Gabon, West Brom defender Allan Nyom says he has no regrets.

Despite the absence of experienced players such as Nyom and Joel Matip, the Indomitable Lions defied all odds and claimed the 31st edition of the biennial tournament.

Speaking to the BCC website, Nyom revealed that after initially rejecting his country's call-up he changed his mind, but coach Hugo Broos told him there was no place for him.

After winning the trophy on Sunday, Broos said those Cameroonian players not at the tournament would rue their decision.

"Let him (Broos) know that I don't have any regrets," Nyom told BBC World Football.

"I heard what Broos said. It made me laugh because he knew what happened and he knew why I was not there.

"It's true, at first I didn't want to go, but afterwards I changed my mind. But he knew that and he knows what he told me, so I have no worries, no regrets.

"If before the tournament they had told me 'Cameroon is going to win and you are not part of the squad', I don't mind because I'm happy I'm playing for my club - it's much more important for me.

"If I had been there, it could stall my club career."

The 28-year-old was one of seven Cameroon players to decide to miss the tournament, with Liverpool's Matip another high-profile absentee.