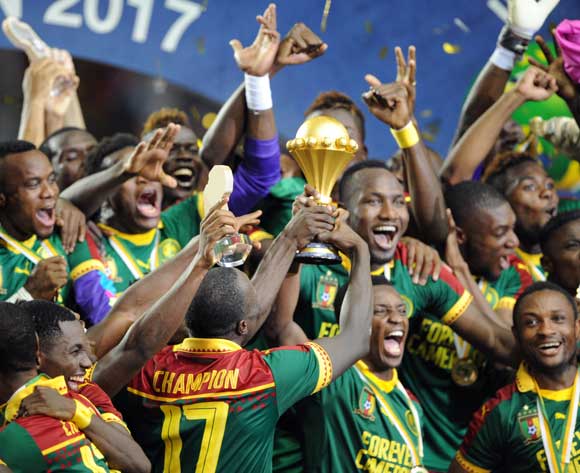 Cameroon celebrates being crowned Champions during the 2017 Africa Cup of Nations Finals, Afcon Final match between Egypt and Cameroon at the Libreville in Gabon on 05 February 2017 ©Sydney Mahlangu/BackpagePix

Upon their arrival from their successful 2017 Africa Cup of nations tournament in Gabon, Cameroon players were welcomed by president Paul Biya.

The Indomitable Lions claimed a 2-1 win over the Pharaohs of Egypt on Sunday to lift the 31st edition of the biennial showpiece.

Reports indicate that Hugo Broos' men were hosted by the country's president at a ceremony in Yaounde on Wednesday.

AL AHLY MANAGER: OUR INTERNATIONALS ARE IN A BAD PSYCHOLOGICAL STATE

According to the BBC website, the African champions presented the Nations Cup trophy to President Biya at Unity Palace.

It is also revealed that the side later traveled in open-top vehicles through the streets of the capital city to parade the trophy to their fans.

The Indomitable Lions squad was given medals by the president, who said their victory should be celebrated by Cameroonians as one nation.

At the end of the ceremony Cameroon First Lady Chantal Biya posed for a series of photos with the players - at one point she used goalkeeper, Fabrice Ondoa's phone to take a 'selfie' with them.

Meanwhile, Cameroon's success in Gabon ended a 15-year wait to lift the coveted trophy again and gave them their fifth title.

The country will hope to retain their trophy when they host the next edition of the Nations Cup in 2019.