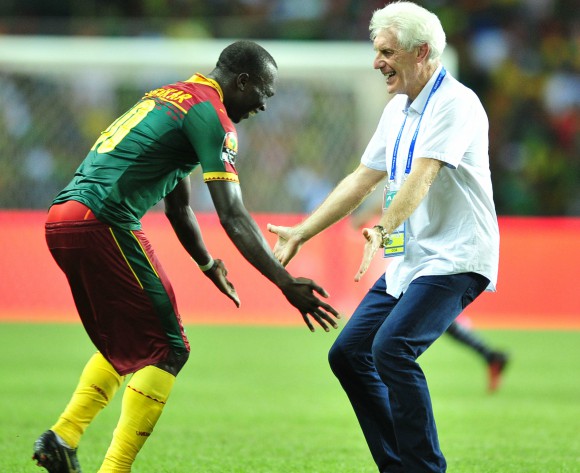 The Belgian Hugo Broos has indicated interest to be the new coach of South Africa and so dump Cameroon, who he led to win a fifth AFCON earlier this month in Gabon, his agent has revealed.

Broos stunned the formbooks when he led a make-shift Indomitable Lions to beat record winner Egypt in the championship game of AFCON 2017.

His agent Gino Laureyssen of Ligi Star Management has revealed Broos’ resume has been submitted to SAFA.

“I asked him [Broos] if he wants to be a candidate for SAFA because they are looking for a head coach,” Laureyssen told KickOff. “So this week we have sent his CV to the CEO of SAFA, but until now we didn’t get any answer, which I think is a little [unusual].

“He’s very interested in working with a young group and I think the South African national team hasn’t done well in recent years, and if you see how he did with Cameroon, with not only stars but players who want to fight and work hard, I think that [his interest] is a good sign.”

Laureyssen said Broos is content with his achievement of lifting the continental crown with Cameroon and would prefer a new challenge elsewhere.

“Look, if he has won the African Cup of Nations and is a hero in that country, I think he’s very smart [to know] that it can only go backwards [from here on out],” he added.

“I mean, he has reached the maximum possible with that team, in that tournament, so I think now the challenge is to look for a new project where he can see what he can do – if he can maybe go to the [2018] World Cup or the next Nations Cup.

“Nothing is decided yet but if he says he wants a new challenge it means a lot and to be honest, personally, the living conditions in South Africa is maybe a little better than in Cameroon."

Cameroon are second in a World Cup qualifying group with leaders Nigeria, Zambia and Algeria.