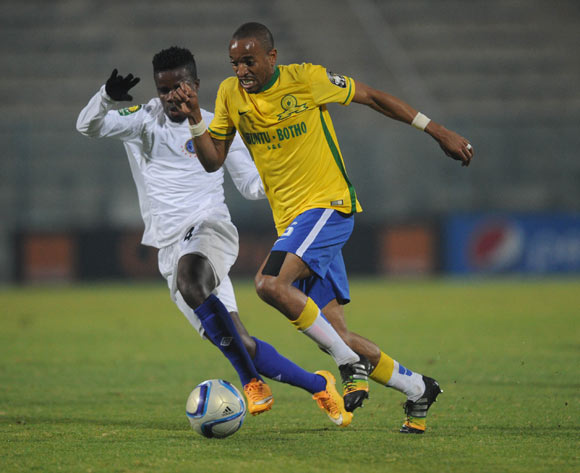 Welcome to coverage of the CAF Super Cup match between Mamelodi Sundowns and TP Mazembe from the Loftus Versfeld Stadium in Pretoria, South Africa.

81' - Penalty! Kekana brought down in the box and Sundowns will have a spot kick late in the game!

78' - Sundowns attackers lining up to score and Laffor stabs a shot at goal... great save from Gbohouo! The goalkeeper has stood between Mazembe and certain defeat!

74' - Mazembe appeal for a penalty after Arendse blocks a shot in the box, but the referee waves away their appeals.

70' - Tau tees up Mabunda, whose low shot is well saved by Gbohouo! The 'keeper fumbles initially, but recovers quickly.

66' - Laffor springs the offside trap, shoots from a tight angle... misses high and wide! Sundowns need to take advantage of one of these chances sooner rather than later.

63' - Kekana lets fly from long range... on target, but a comfortable save for goalkeeper Gbohouo.

61' - Past the hour mark, still goalless in this CAF Super Cup match.

58' - Substitution - Tresor Mputu replaces Elia for Mazembe in the first change of the game.

55' - Sundowns really bossing the game now, Mazembe look to have dropped off in intensity and fitness.

51' - Nascimento gives away a free kick in a dangerous area after pulling down Malango. Kasusula tries his luck from the set piece, but puts his shot wide of the mark.

46' - Back underway in the second half, no changes from either side.

45+1' - Half time - Goalless at the break. Mazembe had the best chance of the half and hit the post twice, while Sundowns saw more of the ball and grew in strength as half time approached.

44' - Laffor shoots from outside the box, the ball almost squeezes through Gbohouo's grasp but he holds on eventually.

41' - Billiat with a low shot, Gbohouo fumbles initially but recovers quickly to smother the loose ball.

38' - Yellow card - Kimwaki is booked for catching Tau with the follow-through in making a clearance.

37' - Billiat with a sight of goal, but he blasts the ball over the target. Probably Sundowns' best chance of the game so far.

35' - Another disappointing set piece from 'Downs, this time Tau's delivery from a corner kick is easily claimed by the Mazembe goalkeeper.

30' - Gbohouo comes off his line quickly to beat Mabunda to a dangerous through ball.

29' - Sundowns have had a few chances to put pressure on their opponents through set pieces, but the delivery hasn't quite been up to scratch.

23' - Midway through the first half, still goalless between Sundowns and Mazembe. The hosts have enjoyed more of the ball, but the visitors have had the better scoring chances.

19' - Adjei with a nice turn to open up space for a shot from long range, but the ball balloons high and wide.

15' - Sinkala gets a talking-to from the referee after taking out Billiat with a cynical challenge.

10' - That really should have been a goal for the Ravens: two clear chances, but both denied by the same piece of woodwork!

9' - Malango sprints free on goal, shoots... and hits the post! He gets onto the rebound, but Onyango recovers to push it onto the post again! So close for Mazembe!

6' - First clear chance of the game goes the way of Sundowns, with Nascimento heading over the crossbar from a corner kick.

5' - Patient play early on from Sundowns, they're looking to settle in a rhythm of dominating the possession and working Mazembe's defence from side to side.

1' - Kick-off - We are underway in Pretoria! Sundowns wear yellow, blue and white, while Mazembe are kitted out in white and black.

18h55 - Just a few minutes from kick-off now, we're set for a battle between two of Africa's modern-day heavyweights.

18h30 - Half an hour to kick-off at Loftus Versfeld, let's take a look at the starting XIs: