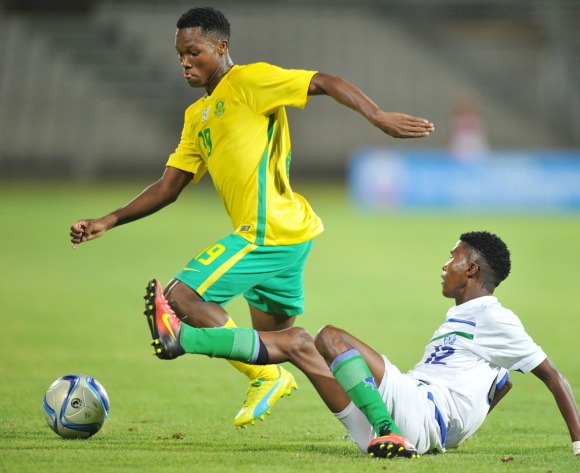 Kobamelo Kodisang of South Africa challenged by Moalosi Mosoeu of Lesotho during the 2016 Cosafa U20 Youth Championship match between South Africa and Lesotho at Moruleng Stadium, Rusternburg South Africa on 07 December 2016 ©Muzi Ntombela/BackpagePix

Cameroon and South Africa will face off in the 2017 Under Africa Cup of Nations (AFCON) Group B game at the Levy Mwanawasa Stadium in Ndola on Monday.

The young Indomitable Lions had to overcome Zimbabwe and Libya in order to qualify for this year's U20 AFCON finals in Zambia.

Team captain and midfielder Samuel Gouet and striker Eric Ayuk were some of Cameroon's star players during their qualifying campaign.

Cameroon have reached the U20 AFCON final five times. They have won the tournament once. They beat Burundi in the 1995 final in Nigeria.

Meanwhile, South Africa beat Namibia and Lesotho in the second-round and third-round respectively during the qualifying campaign.

Amajita have never won the U20 AFCON tournament. But they did reach the final in 1997 and they lost to tournament hosts Morocco.

Sibongakonke Mbatha and Liam Jordan are two of South Africa's dangermen upfront and they will be hoping to impress in Zambia.

Sudan and Senegal, who are also in Group B, will lock horns in the first match of the group on Monday.