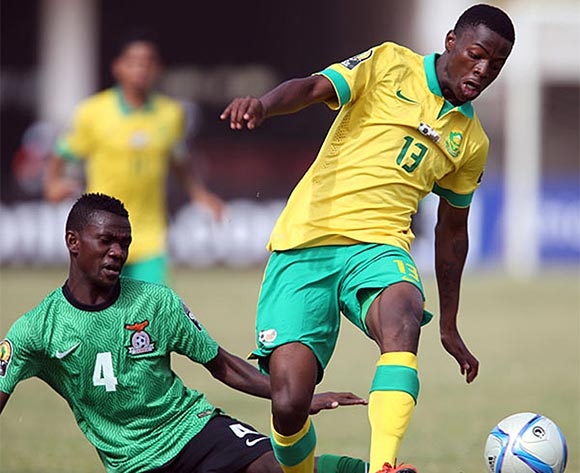 Phakamani Mahlambi of South Africa challenged by Boyd Mkandawire of Zambia during the U 23 African Cup of Nations match between South Africa and Zambia at Stade Leopold Stadium,Senegal on the 01 December 2015 ©/BackpagePix

In the wake of a squabble between his club and the South African Football Association regarding the release of Bidvest Wits striker Phakamani Mahlambi, the club has since released the player.

The striker has been released by the Clever Boys and will now be able to face Senegal on Thursday as well as against Sudan on Sunday in Group B at the U20 Africa Cup of Nations.

'Phaka' missed their 3-1 opening tie against Cameroon as they marched to a 3-1 win on Monday evening, but he said he is happy to be part of the squad.

“I am very happy to be a part of the Amajita family and I am grateful that the coaches have selected me on this very crucial mission for our country,” he said to the SAFA website.

“I watched the match last night and was very eager to arrive here to start training with my teammates.

“I was very impressed with the way they played last night – and when called upon by the coaches, I will do my best to add on what is already a very a competitive team.

“I know that I will have to fight for a place in the starting line-up and it will not be easy as the team has already built its foundation, however, I am ready to earn my national colours and would like to see my country playing at the FIFA Under-20 World Cup tournament.

“We are a very blessed nation. The amount of talent we have is amazing and I hope that with the three goals that we scored against Cameroon, it is the beginning of great things to come.”

Amajita will hope to qualify for the semi-finals and be able to reach the 2017 FIFA U20 World Cup in South Korea in May.