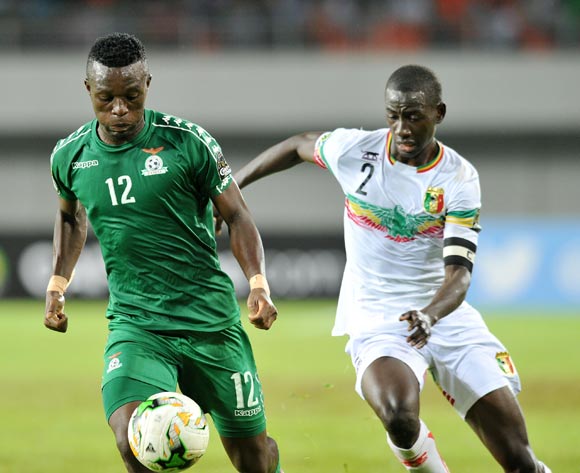 Emmanuel Banda of Zambia challenged by Abdoul karim Dante of Mali during the 2017 Total Zambia U-20 African Cup of Nations match between Mali and Zambia at Heroes National Stadium, Lusaka Zambia on 01 March 2017 ©Muzi Ntombela/BackpagePix

Two braces from Fashion Sakala and Edward Chilufya, as well as goals from Emmanuel Banda and Enock Mwepu ensured Zambia beat Mali 6-1 in their 2017 U20 Africa Cup of Nations, Group B tie at the National Heroes Stadium in Lusaka on Wednesday evening.

The result means the hosts are on six points from two wins and top Group B, ensuring they have reached the semi-finals of the tournament, thus also booking a spot in the 2018 U20 FIFA World Cup in South Korea in May.

Despite a bright start by the Young Chipolopolo, it was the Young Eagles who grabbed an early goal as they silenced the crowds at the Heroes Stadium.

Skipper Abdoul Dante scored in the sixth minute when the hosts conceded a corner which was well drilled into the box, and the defender made no mistake with a powerful header, 1-0.

However, three minutes later, Beston Chambeshi's men leveled matters when Sakala made it 1-1 as he converted with a powerful header when Mali failed to deal with a cross in the penalty area.

In the 18th minute, Sekou Koita nearly scored after a brilliant pass into the box - the Malian forward had time to kill the ball and unleashed a shot which was parried away by goalkeeper Mangani Banda.

However, the hosts made it 2-1 in the 25th minute through Banda when he produced a powerful shot from a distance which beat keeper Samuel Diarra on his left corner.

Zambia continued to run riot in the contest as they scored their third goal when Mwepu finished a beautiful cross from the left flank by Chilufya in the 38th minute.

Upon their return from the tunnel, the hosts continued where they left off as they bagged their fourth - a cross resulted in a scramble in the box and Chilufya's header beat the struggling Diarra.

Good football dished out by the hosts and their good movement forward produced their fifth goal as Chilufya completed his brace four minutes later after receiving a great pass from Sakala on the left.

With the crowd pushing them on, Sakala also completed his brace with a clever run onto the edge of the box before taking a powerful shot which beat Diarra on his left post for the sixth time.

In the wake of the heavy loss, Mali now occupy the bottom of the group with one point and will now hope to beat Guinea in their final match whilst Zambia face Egypt.