Mbokani out for six weeks 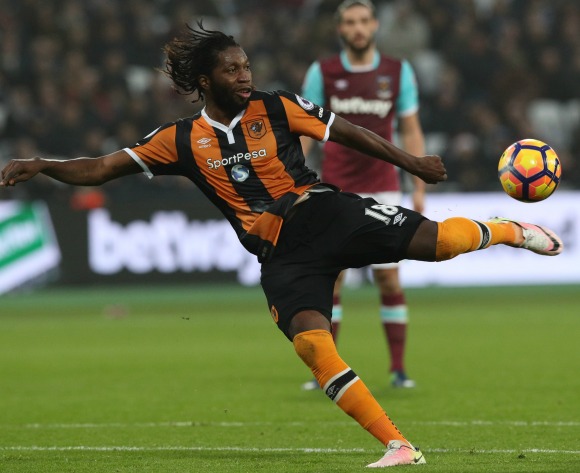 According to reports coming from England, Democratic Republic of Congo international and Hull City striker Dieumerci Mbokani will be out for six weeks after sustaining a knee injury.

ESPN reports the 31-year-old forward is on loan from Dynamo Kyiev for the rest of the season.

He was replaced by Oumar Niasse in the second half of Saturday's 1-1 draw with Burnley.

Furthermore, the club has since issued a statement regarding the player's injury on their club official website.

The Tigers' website also indicated that defender Harry Maguire is also out, carrying a knee injury against Burnley last weekend.

The 23-year-old played on against the Clarets after suffering a knee injury in the first half and manager Marco Silva was left to praise the defender's spirit and commitment.

"Following on from the injury picked up during Saturday's game against Burnley, Harry Maguire's knee has settled down well," the club's statement announced.

"The medical staff will continue to monitor Maguire in the lead up to next weekend's trip to Leicester City."

Meanwhile, Mbokani is not the only squad member out with an injury as centre-backs Michael Dawson and Curtis Davies are not expected to feature against the Foxes this weekend.

🏥 | Dieumerci Mbokani is set to be out for six weeks after suffering a hamstring injury against @BurnleyOfficial https://t.co/tnzDdplCaE pic.twitter.com/T4QMA0TjBG