Cameroon bounce back with comfortable win 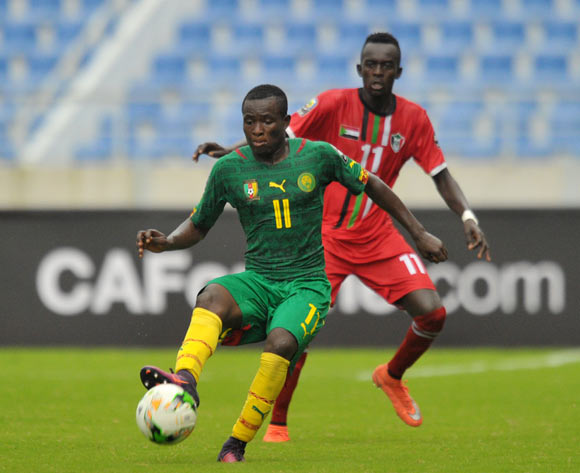 Eric Ayuk Mbu of Cameroon challenged by Ramadan Kabo Suliman of Sudan during the 2017 Total Zambia U-20 African Cup of Nations match between Sudan and Cameroon at Levy Mwanawasa Stadium, Ndola Zambia on 02 March 2017 ©Muzi Ntombela/BackpagePix

Cameroon are back in semifinal contention at the 2017 Africa U-20 Cup of Nations after cruising to a 4-1 win over Sudan in Ndola on Thursday.

The result at the Levy Mwanawasa Stadium sees Cameroon join South Africa at the top of Group B on three points, while Sudan drop to the bottom of the standings on one point. The teams’ true positions will be clarified by the second match later today between SA and Senegal.

Cameroon almost opened the scoring with just a few seconds on the clock, as Preston Tabortetaka was denied by goalkeeper Mohamed Saeed and his follow up from the rebound hit the outside of the post.

In the ninth minute the West Africans’ early dominance was rewarded with the first goal: Eric Ayuk crossed the right flank, Saeed could only flap at the ball and Ketu Jih was able to direct a shot into the unguarded goal to make it 1-0 to the Indomitable Lions.

Just past the half hour mark Jih missed out on a chance to make it 2-0, failing to find the target after Saeed was caught in no-man’s land, while he also sent a point-blank header over the target to ensure the half ended with Cameroon just one goal to the good.

Yet the Lions had to wait just seven minutes of the second half before they doubled their lead, with Ayuk heading home from Frabrice Ngah’s cross to net his second goal of the tournament and make it 2-0.

The match was put to bed in the 74th minute when Cameroon extended their lead to 3-0. This time captain Samuel Oum Gouet fired home a left-footed volley which travelled through a crowd of players and caught Saeed unawares.

Sudan pulled a goal back with 10 minutes to play when Herve Bodiong was caught napping on the ball, allowing Khaled Osman to tee up Walaa Musa to score. It proved to be no more than a consolation for the East Africans, with Cameroon’s right-back Olivier Mbaissidara restoring his side’s three-goal lead with a brilliant solo effort in the 89th minute.