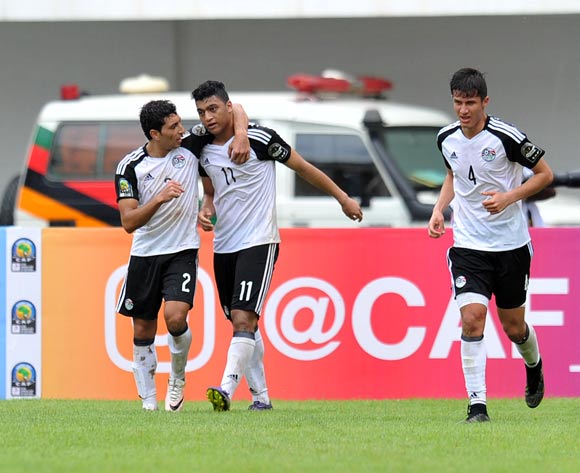 Mostafa Mohamed Abdalla of Egypt celebrates goal with teammates during the 2017 Total Zambia U-20 African Cup of Nations match between Guinea and Egypt at Heroes National Stadium, Lusaka Zambia on 01 March 2017 ©Muzi Ntombela/BackpagePix

Zambia and Egypt will face off in the 2017 Africa Cup of Nations (AFCON) Group A game at the National Heroes Stadium in Lusaka on Saturday.

The Young Chipolopolo have already booked their place in the semi-finals of the continental competition and the 2017 FIFA Under-20 World Cup finals.

This was after they hammered Mali 6-1 in their previous Group A game. Zambia also defeated Guinea 1-0 in their first group game.

As a result Zambia are sitting at the top of Group A with six points. They are two points above second-placed Egypt's Young Pharaohs.

Fashion Sakala is Zambia's dangerman. The promising forward has scored two goals in two games and he will be looking inspire his side to victory on Saturday.

Meanwhile, Egypt are gunning for nothing but a victory over the tournament hosts in order to advance to the semi-finals.

The Young Pharaohs were held to a 1-1 draw in their previous Group A game. They had drawn 0-0 with Mali in their first game of the tournament.

Egypt are placed second on the Group A standings with two points. They are only a point ahead of Guinea and Mali, who are placed third and fourth respectively.

Mostafa Abdalla is oozing with confidence after scoring Egypt's first goal in the tournament. The attacker will be hoping to score and help his side win on Saturday.