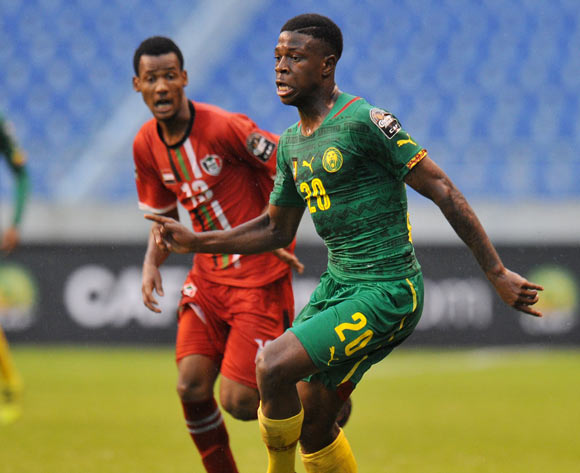 Kevin Soni of Cameroon challenged by Musab Mohamed of Sudan during the 2017 Total Zambia U-20 African Cup of Nations match between Sudan and Cameroon at Levy Mwanawasa Stadium, Ndola Zambia on 02 March 2017 ©Muzi Ntombela/BackpagePix

Cameroon will be hoping to bag their second win in the 2017 U20 Africa Cup of Nations, Group B as they face tough opponents in Senegal on Sunday.

The final group match for the Young Indomitable Lions comes at the back of a gutsy win last Thursday.

In their opening Group B tie Cameroon lost 3-1 against Thabo Senong's South Africa before bouncing back to beat Sudan 4-1.

Cameroon are under pressure to reach the semi-finals of the tournament and the U20 2017 FIFA World Cup in South Korea.

Placed at number three with three points, a win will be their mission to ensure they finish as number two in the group.

Senegal, on the other hand, will also be targeting a win to ensure they consolidate their top spot in the group.

Senegal opened their group stage campaign with a 1-1 draw against Sudan and rallied to find a winner against South Africa.

Senegal showed character as they surprised Amajita with a 4-3 win last Thursday to boost their chances of reaching the semi-finals.

On the log table, they occupy the pole position with four points and a win will definitely seal their qualification in the top four.

The West Africans will also be eyeing a spot at the junior World Cup, but they need to down Cameroon.

The Young Lions of Teranga coach, Francois Koto, will be hoping to beat Cameroon as his side is boosted by the availability of skipper Mamadou Diarra.

“It gives us joy that the team is complete with the return of the captain and gives us impetus to work hard,” said Koto.

“The captain is very important to the team but it is up to him to show that his absence had an effect on the team and that he is ready to join his friends in working for the team to complete the job we already started.

“It is good to have him back and we are looking forward to a good game.”

The match will be staged at the Levy Mwanawasa Stadium in Ndola on Sunday at 15:00.