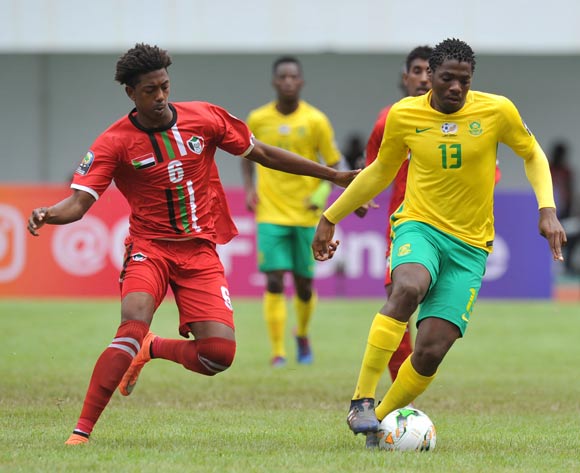 Thendo Mukumela of South Africa challenged by Ammar Taifour of Sudan during the 2017 Total Zambia U-20 African Cup of Nations match between Sudan and South Africa at Heroes National Stadium, Lusaka Zambia on 05 March 2017 ©Muzi Ntombela/BackpagePix

Two second half goals in the space of six minutes handed South Africa an impressive 3-1 win over Sudan in their final 2017 U20 Africa Cup of Nations, Group B game on Sunday at the National Heroes Stadium.

The result combined with Senegal’s 2-0 win over Cameroon in the other Group B, at the same time on Sunday, means South Africa finished second in the standings and thus qualified for the semifinals of the competition.

Phakamani Mahlambi opened the scoring in the 13th minute for South Africa before Khaled Osman levelled matters for Sudan in the 25th minute.

Grant Margeman gave South Africa the lead for the second time on the hour mark, which was followed six minutes later with their third goal from Sibongakonke Mbatha which handed Amajita the 3-1 win.

South Africa finished second in Group B with six points following two wins and a loss.

Senegal ended the group stages unbeaten after two wins and a draw which leaves them on seven points.

Cameroon and Sudan both exit the tournament after finishing third (with three points) and fourth (with one point) respectively.

Senegal will now take on Guinea in the semifinals of the U20 Afcon on Thursday, March 9 while South Africa will face hosts Zambia on Wednesday, March 8.

With Senegal and South Africa both qualifying from the group stages it means they have also qualified for the U20 FIFA World Cup which will get underway in May this year.