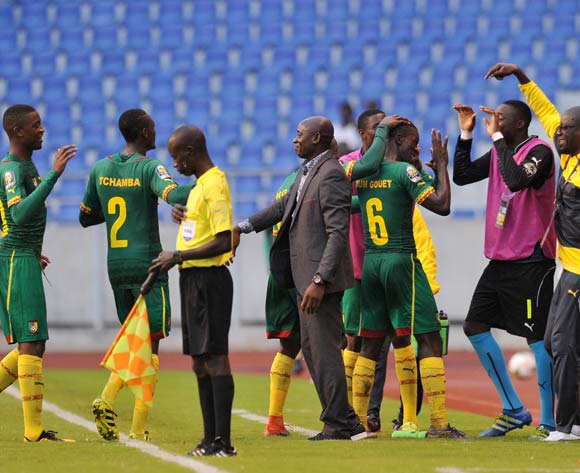 Ammar Taifour of Cameroon (6) celebrates goal with teammates during the 2017 Total Zambia U-20 African Cup of Nations match between Sudan and Cameroon at Levy Mwanawasa Stadium, Ndola Zambia on 02 March 2017 ©Muzi Ntombela/BackpagePix

Young Indomitable Lions trainer Besong Ashu has revealed that Hugo Broos has been impressed by three Cameroon players at the 2017 Under-20 Africa Cup of Nations (AFCON) finals.

Cameroon were knocked out of the continental tournament after losing 2-0 to Senegal in their final Group B game which was played Zambia on Sunday.

"We lost to a strong Senegal team. We were up for it, really motivated and the players were courageous," Ashu told CAF Media.

"However, such is football; sometimes you win, the next moment you lose. You have to accept whatever result comes your way.

"Our first objective was to qualify for the FIFA U-20 World Cup, but we could not achieve that. I’m satisfied with the performance of my players," he continued.

"There is been a big development for the players, most of whom five months ago were playing in the fifth tier of Cameroonian football.

"The Head Coach of the senior national team, Hugo Broos, was here and watched two games, and about three players really impressed him."

Senegal and South Africa finished first and second respectively on the Group B standings, and they advance to the semi-finals of the tournament.