Lungu: Zambia will lift U20 AFCON 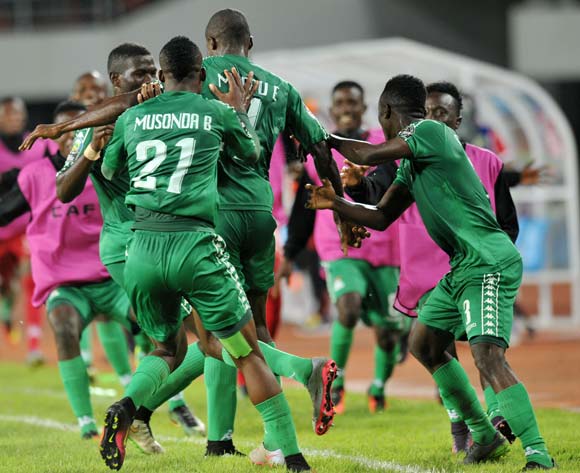 Enock Mwepu of Zambia with teammates during the 2017 Total Zambia U-20 African Cup of Nations match between Mali and Zambia at Heroes National Stadium, Lusaka Zambia on 01 March 2017 ©Muzi Ntombela/BackpagePix

As Zambia the U20 side are set to face their South African counterparts in the U20 2017 Africa Cup of Nations semifinal on Wednesday, the country's president Edgar Lungu says they will win the tournament.

Lungu was speaking to the reporters at the National Heroes Stadium, saying the investment made in youth sports was finally paying dividends.

Beston Chambeshi's men defeated Egypt 3-1 in their final Group A match on Saturday and the president said the AFCON trophy will be a great gift for the country.

Lungu also assured the Junior Chipolopolo of his continued support, confirming his availability to support them on Wednesday for the semi-final clash against Amajita.

SENONG: SA TO CORRECT ERRORS BEFORE U20 AFCON SEMIS

“Obviously Zambia can win the tournament, it’s a team to beat in this competition. The tournament is being won by Zambia,” said Lungu.

“As Zambians, let’s keep united, let’s love one another and let’s enjoy Zambia. The game of football unites us. The beauty of winning is we are all friends now.

“Given the decisive and steady progress the Junior Chipolopolo is making in the ongoing Africa Under-20 Cup of Nations, I am more than convinced that we are on course towards forming a solid senior team that can bring us greater glory not too long from now.”

However, when asked about the squabble between FAZ president Andrew Kamanga and former FAZ boss, Kalusha Bwalya, the Head of State said he will not involve himself in FAZ politics.

“Those are their internal politics, they are at FAZ, I don’t want to involve myself, I have my own politics to take care of,” he added.

The match between the two Southern African nations is slated for 18:00 at the National Heroes Stadium at Lusaka.