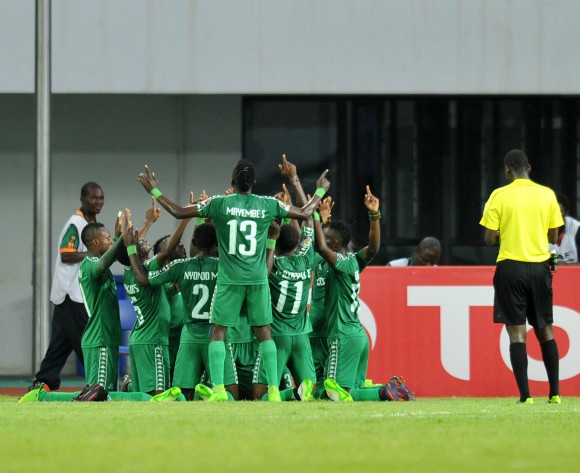 Edward Chilufya of Zambia celebrates goal with teammates during the 2017 Total Zambia U-20 African Cup of Nations Final match between Zambia and Senegal at Heroes National Stadium, Lusaka Zambia on 12 March 2017 ©Muzi Ntombela/BackpagePix

Zambia were crowned 2017 Under-20 Africa Cup of Nations (AFCON) champions after beating Senegal 2-0 at the National Heroes Stadium in Lusaka on Sunday evening.

Senegal dominated possession in the opening stages of the game and Zambian shot-stopper Mangani Banda was the busier of the two goalkeepers in the first 10 minutes of the game.

However, Zambia grew in confidence as the game progressed and they took the lead through Patson Daka, who scored from close range to make it 1-0 to the Young Chipolopolo in the 17th minute.

The Young Lions of Teranga had a chance to equalize from a free-kick in a promising area on the hour-mark, but Ibrahima Niane placed his effort over the crossbar without troubling keeper Banda.

It was soon 2-0 to Zambia against the run of play in the 37th minute when Edward Chilufya scored following a mistake in the Senegal defence with keeper Lamine Sarr to blame.

Nevertheless, Zambia were leading 2-0 during the half-time break thanks to two goals from Daka and Chilufya, who had both netted their fourth goals of the tournament in the first-half.

The Young Chipolopolo began the second-half lively with Enock Mwepu forcing Senegal keeper Sarr into a good save following a Zambia corner-kick five minutes into the second-half.

The Young Lions of Teranga then took control of the game - pushing more men forward with their targetman Aliou Badji keeping the Young Chipolopolo defence with his power and pace.

The striker unleashed a powerful shot in the 63rd minute from outside the Zambia box, but keeper Banda was equal to the task pulling off a decent save to deny the lanky forward.

With his side struggling to penetrate the Zambia defence, Senegal coach Joseph Koto introduced France-based striker Dominique Edouard Miquilan in the 75th minute.

However, Man of the Match Banda and his Young Chipolopolo defence stood firm at the back in the remaining minutes and Zambia emerged 2-0 winners on the night.