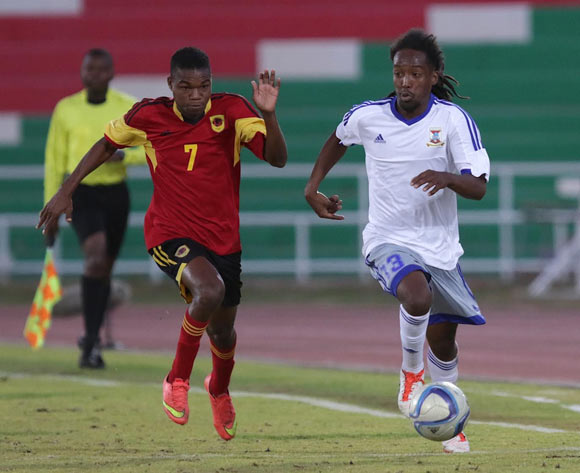 Laval Rungassamy of Mauritius (left) and Nelson Mudile of Angola in action during their Cosafa Castle Cup match in Windhoek on 16 June 2016. Photo: BackpagePix

Comoros will welcome Mauritius in the 2019 Africa Cup of Nations (AFCON) qualifier at the Stade International Saïd Mohamed Cheikh in Mitsamiouli on Friday.

This will be Les Coelecantes' first match in 2017 having played to a draw with Gabon in their last game. The friendly game was played in November 2016.

Amir Abdou, the Comoros coach, is most likely to look to El Fardou Ben Mohamed, who has scored seven goals in the Greek Super League for Panionios this season.

Les Coelecantes will be keen to record a victory in this preliminary round first-leg clash at home in order to stand a good chance of advancing to the group stage.

Meanwhile, Mauritius's Les Dodos are expected to return to action for the first time since losing to Mozambique in the 2017 AFCON qualifier last September.

Joe Tshupula, the Les Dodos coach, will be hoping that Kevin Bru, who plies his trade in England for Ipswich Town, can inspire his side to victory.

Les Dodos are targeting nothing but an away victory in order to put themselves in a good position to progress into the group stage.