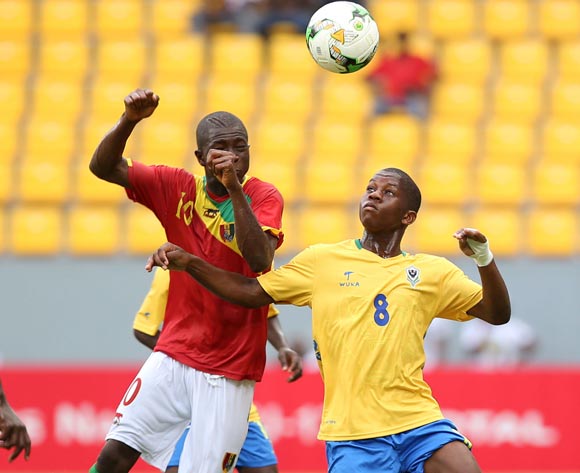 AGUIBOU CAMARA of Guinea MESHAK BABANZILA MAYALA of Gabon (r) during the 2017 Under 17 Africa Cup of Nations Finals football match between Gabon and Guinea at the Port Gentil Stadium, Gabon on 14 May 2017 ©Alain Guy Suffo/BackpagePix

Guinea Under-17 coach Souleymane Camara says he is not surprised by their emphatic 5-1 victory over Gabon on Sunday afternoon.

The Junior National Elephants thumped the 2017 U17 Africa Cup of Nations (AFCON) hosts in the opening game of the tournament at the Stade Port-Gentil.

But Camara made it clear that their main objective is to do well in Gabon and qualify for the 2017 U17 World Cup finals which will be hosted by India in October.

"We deserved the victory which came as a result of hard work," Camara told CAF's official website.

"We are happy to win the first match which set a good tone for our objective of qualifying for the World Cup but the work continues in the competition.

"I'm not surprised with our win because we have been working together for almost one year and we were able to fight our way against Gabon.

"The result today has given us confidence about our ability though we know the journey ahead is not going to be easy," he continued.

"We are going to correct some of the mistakes we noticed particularly in the second half and prepare well for our next two matches because we have not really won the trophy.