Guinea and Cameroon in U17 Afcon stalemate 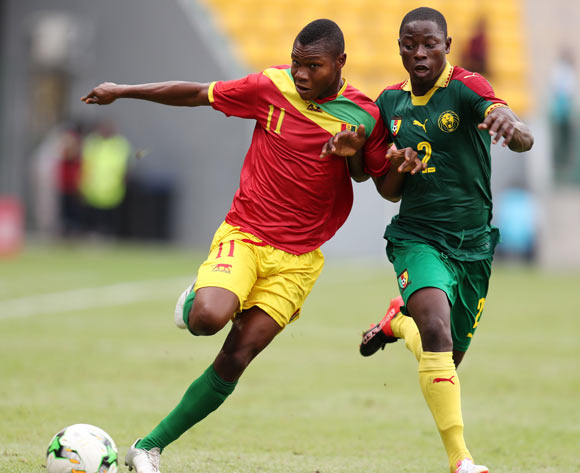 Djibril Sylla of Guinea challenged by Ahmad Toure Ngouyamsa Nounchili of Cameroon during the 2017 Under 17 Africa Cup of Nations Finals football match between Guinea and Cameroon at the Port Gentil Stadium, Gabon on 17 May 2017 ©Muzi Ntombela/BackpagePix

Guinea maintained their place at the top of Group A in the 2017 U17 Africa Cup of Nations after playing to a 1-1 draw against Cameroon at the Stade Port Gentil on Wednesday.

The draw sees Guinea at the top of Group A with four points after beating Gabon 5-1 in their opening match three days ago.

The point for Cameroon is their first after suffering an embarrassing 4-0 defeat to Ghana in their first Group A match three days ago.

Guinea started positively and managed to open the scoring in the 22nd minute courtesy of a strike from Yamodou Touré, 1-0.

Guinea continued to dominate the half, but could not add to the scoreline before the break.

Cameroon came out fighting in the second half and managed to pull level in the 68th minute courtesy of a striker from Zobo, 1-1.

Both teams pushed forward in the final 20 minutes of the match, but neither could find the back of the net as they game ended all-square.

Cameroon are next in action on Saturday, May 20 against Gabon while Guinea will take on Ghana on the same day in their final Group A games.