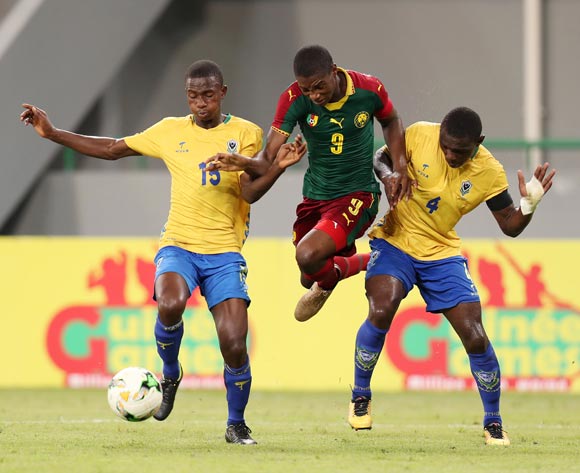 Stephane Thierry Zobo of Cameroon challenged by Aziz Giroly Bourobou Mombo and Christophe On a Nguema of Gabon during the 2017 Under 17 Africa Cup of Nations Finals football match between Gabon and Cameroon at the Port Gentil Stadium, Gabon on 20 May 2017 ©Muzi Ntombela/BackpagePix

Cameroon defeated Gabon 1-0 in the 2017 Under-17 Africa Cup of Nations (AFCON) Group A match at the Stade Port Gentil in Port Gentil on Saturdat night.

As a result Junior Panthers, who are the hosts, and the Junior Indomitable Lions crashed out of the tournament after finishing fourth and third respectively in Group A.

The Junior Indomitable Lions should have taken the lead just eight minutes into match, but Stephane Thierry Zobo missed the target.

However, the promising forward made amends a 11 minutes later as he dribbled past a few defenders, before scoring to make it 1-0 to Cameroon.

The Junior Panthers did create chances towards the half-hour mark, but the Indomitable Lions defence looked solid most of the time.

Cameroon were able to hold onto their slender lead and they were leading 1-0 against Gabon during the half-time break following a tightly contested first-half.

Fahd Richard Ndzengue Moubeti looked lively for Gabon a few minutes into the second-half as he looked to restore parity for his side.

However, the Junior Indomitable Lions defence which was led by Fabrice Ndzie Mezama were able to contain the Junior Panthers striker.

Cameroon regained control of the match after the hour-mark and hard-working forward Zobo was searching for his second goal of the match.

The Junior Indomitable Lions captain and his team-mates were able to create several goalscoring opportunities, but they missed them.

Although, both sides launched late attacks, they could not hit the back of the net in the closing stages of the match and Cameroon won 1-0 on the night.