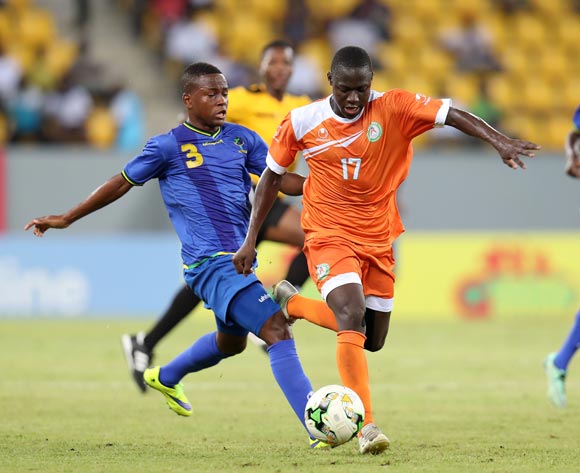 Ibrahim Boubacar Moussa of Niger challenged by Nickson Clement Kibabage of Tanzania during the 2017 Under 17 Africa Cup of Nations Finals football match between Tanzania and Niger at the Port Gentil Stadium, Gabon on 21 May 2017 ©Muzi Ntombela/BackpagePix

Niger beat Tanzania 1-0 in a Group B match at the Stade Port Gentil on Sunday night to make it into the semifinals of the 2017 U17 Africa Cup of Nations.

The win sees Niger tie on four points with Tanzania in Group B, but with a superior head-to-head record and a better goal difference Niger are placed second on the standings.

The loss for Tanzania sees them exit the tournament following a goalless draw against Mali, a 2-1 win over Angola and a loss to Niger.

The game itself between Niger and Tanzania produced very little in terms of goalmouth action. Both teams were a little timid in attack and instead opted to defend stoically in the hope of getting a goal on the counter-attack.

In the end, the difference on the night was an own goal scored by Ali Hussein Msengi just before half time which gave Niger a lead they would not surrender.

The second half saw Tanzania throwing players forward in search of the equaliser, but the Niger defence stood firm to hold on for the win.

Niger will now play Ghana, who finished top of Group A, in the semifinals of the 2017 U17 Afcon on Wednesday, May 24.