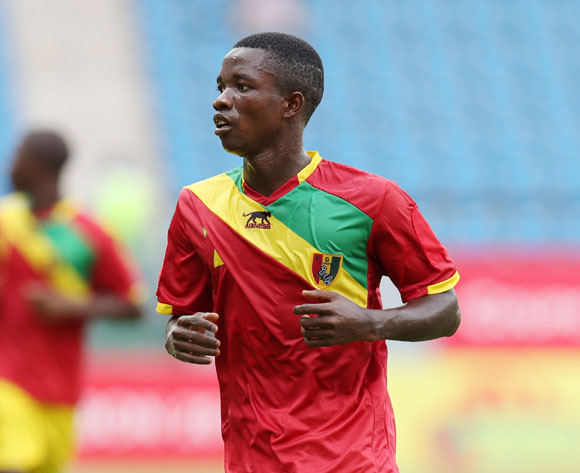 Samuel Conte of Guinea during the 2017 Under 17 Africa Cup of Nations Finals football match between Guinea and Cameroon at the Port Gentil Stadium, Gabon on 17 May 2017 ©Muzi Ntombela/BackpagePix

Niger will hope to clinch the bronze medal when they meet Guinea in the 2017 U17 CAF Africa Cup of Nations third-place play-off game in Gabon on Sunday.

Having defied the odds in the tournament to reach the semi-finals, Niger are a motivated side and can cause an upset on Sunday.

Coach Ismaila Tiemoko will want to wrap up their campaign with a medal and to win on Sunday is a must for them.

In the tournament, they finished as number two in Group B with four points behind Mali, after bagging one win, one draw and one loss.

However, their 6-5 loss on penalties to Ghana in the semi-finals after a 0-0 draw has boosted Niger ahead of this clash.

“The game was done very well and as I said before now, we knew ourselves and Ghana was very lucky in the penalty shoot-out,” said Tiemoko.

“I want to congratulate the coach of Ghana for this victory. We have improved and our next focus after the U-17 is the U-20 which hopefully most of these boys would be available and we have learned so much from this tournament.”

On the other hand, Guinea will also come to the encounter in high spirits after their good run in the tournament.

Although they lost 2-0 on penalties to Mali on Wednesday in the semis, they finished as number two in Group A behind the Black Starlets of Ghana.

On the other hand, both sides have also reached the 2017 U17 FIFA World Cup in India and that achievement will also have a positive effect on both teams.

The match will be staged at Stade de l'Amitié Sino-Gabonaise, Libreville on Sunday at 18:30 (CAT).