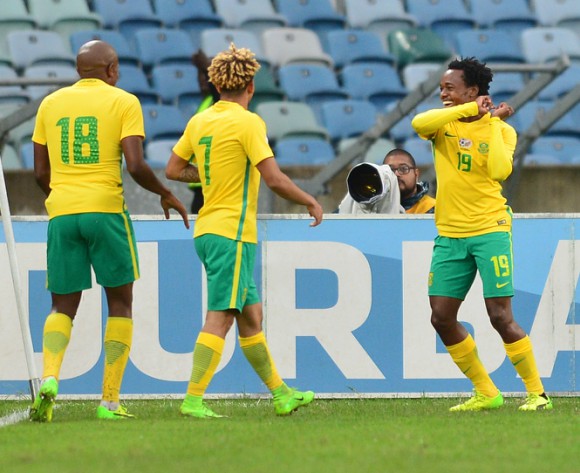 Percy Tau of South Africa celebrates a goal with teammates

According to Bafana Bafana's team manager, Barney Kujane, the South African senior national team has prepared well ahead of their clash against Nigeria next month.

Bafana are set to travel to Nigeria for their 2019 CAF Africa Cup of Nations qualifier under new coach Stuart Baxter on June 10.

However, Kujane says he does not like surprises, insisting he is well prepared for whatever happens when the national team faces the Super Eagles.

According to the Sowetan, Kujane travelled to the West African country in an aim to inspect facilities before the encounter.

Although Bafana are yet to beat Nigeria in an official match, Kujane promised that everything has been done to ensure that preparations run as smoothly as possible.

‘‘If you leave South Africa and you have not done your homework‚ a surprise in Nigeria can cause complete disarray to the coach’s plans and to the players‚” Kujane said to the Sowetan.

‘‘When you are the national team manager‚ you have got to make sure that there are no surprises for the coach.

‘‘I do not like surprises. This is the first game for the coach and our first game in the 2019 Afcon qualifiers. So we cannot afford to start the qualifiers on the back foot.”

It is reported that the manager visited Godswill Akpabio International Stadium in Uyo State as he informed Baxter about the grass which is similar to the FNB Stadium.

Furthermore, Baxter will now take his charges through their paces at the Soccer City from Sunday, 04 June, until they jet off to Nigeria next Wednesday.