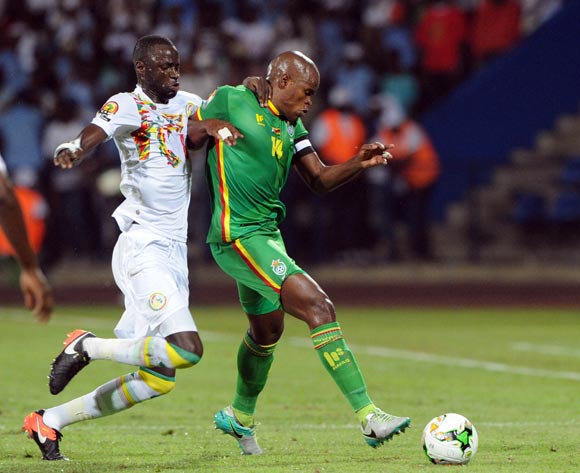 Willard Katsande of Zimbabwe is challenged by Cheikhou Kouyate of Senegal during the Afcon Group B match between Senegal and Zimbabwe on the 19 January 2017 at Franceville Stadium, Gabon Pic Sydney Mahlangu/ BackpagePix

Zimbabwe national team coach Norman Mapeza has rubbished reports that he was instructed to select the Warriors national side by the FA.

The Zimbabweans are getting their 2019 CAF Africa Cup of Nations Qualifiers preparations underway as they meet Liberia next week.

However, the team selection has been hit by off-the-field issues where Mapeza is reported to have received orders from the football association to snub some of the players.

Media reports in the country indicate that Mapeza left out former captain, Willard Katsande and senior players such as Nyasha Mushekwi, Cuthbert Malajila and Matthew Rusike.

Furthermore, it is announced that the former defender received a command from ZIFA boss, Philip Chiyangwa.

“For me, never, ’coz I’m not the substantive coach here. I’m just here to help these guys, so who is going to tell me not to pick this and that player? Nobody told me that,” he said to the News Day.

“In this team, we have youngsters, who I think need to be given an opportunity. Cuthbert is already 33.

"Nyasha is almost there as well. So it’s good to give these youngsters a chance.

"I don’t have any problem with these guys. I have worked with them before and if I need them in the future, I will call them.”

The website reports that the COSAFA boss was previously quoted by a local newspaper declaring that the four “mercenaries” would never play for the Warriors as long as he was the ZIFA boss.