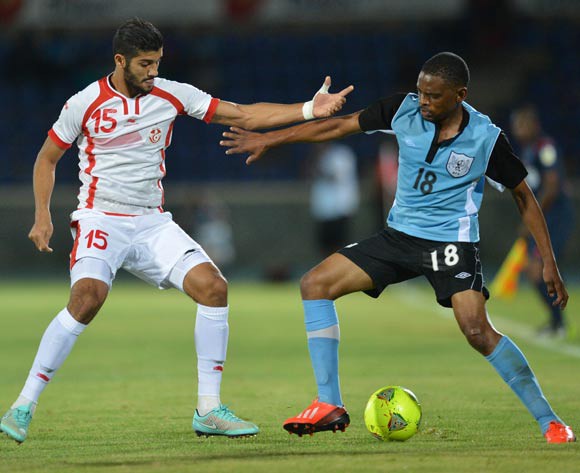 Tunisia's Mohamed Ali Moncer and Botswana's Mogogi Gabonamong vies for the ball during the 2015 African Cup of Nations qualifying football match between Tunisia and Botswana on November 14, 2014 at the National Stadium in Gaborone, Botswana

“I have decided to retire from football,” Gabonamong told Rollers' official website.

"I just felt this was the right time, I am at an age where I feel I have done enough and need to move on from playing the game.

“I intend to carry on with football matters, although I’ll no longer be a player, I’ll still continue to contribute to football. My advice to younger players is that there is no substitute to discipline and hard work," he added.

"Your lifestyle should reflect the fact that you are a footballer, you need your body in good condition at all times. Young Batswana players should be ambitious; dream big about playing in Europe."

Gabonamong, who had a trial stint with English giants Manchester United as a teenager, had a long illustrious career winning major trophies in Botswana and South Africa.

Gino had spells with Engen Santos, Bloemfontein Celtic and SuperSport United where he won the 2012 Nedbank Cup.