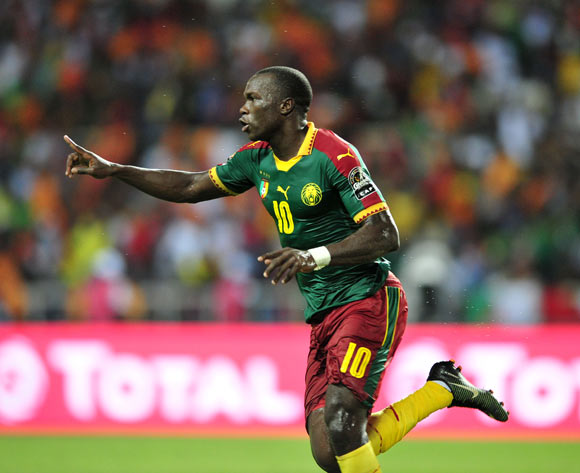 Good evening and welcome to our live coverage of the 2017 FIFA Confederations Cup, Group B clash, between Cameroon and Chile from the
Otkrytiye Arena in the Russian capital of Moscow, on Sunday 18 June.

90+1' GOAL! Vargas has the ball in the back of the net once more, but he is denied again!! No, the video assistant rules in his favour this time and its a goal, 2-0. Great work by Sanchez in the build up.

81' GOAL! Chile have their breakthrough and it is well deserved. Vidal heads home Sanchez pin-point cross from the left flank.

72' MISS! Glaring miss by Mauricio Isla as he sends his header attempt wide with an open goal at his mercy! Chile finding their rhythm once more.

67' Free-kick in a great position comes to nothing for Cameroon as Moukandjo guides his attempt wide of goal.

60' More than an hour played in Moscow and nothing to write about so far in the second - despite the fact maybe that Arsenal's Alexis has made his way onto the pitch.

50' Cagey start to the second half, with both teams in search of the games opener following he controversial end to the opening stanza.

45+1' Half-Time: Cameroon 0-0 Chile, controversial end to the half - still goalless!

45+1' GOAL! NO! Vargas finds the back of the net for Chile! Finally for the South American's who dominated for most of the half. Vidal with beautifully weighted pass - Vargas makes no mistake.  BUT WAIT! The third official says Vargas was offside and the goal is chalked off!

40' Into the final five minutes of the half we go. Following what was a frantic start to the match, things have gone a tad quiet but still both teams showing a lot of attacking intent.

30'  Ondoa the busier of the two goalkeepers, but he is holding his ground! Continuing where he left off in Gabon a few months ago.

25' SAVE! Ondoa down well once more, this time to deny Beausejour who's stinging shot was heading for the back of the net.

20' Still no goal in Moscow, quite unbelievable actually, with both teams creating a catalogue of chances.

17' Ngadeu has the ball in the back of the net, but the official had blown his whistle for a prior foul on Vidal.

11' CHANCE! Herrera forced into a good save following a quick counter-attack by Cameroon. Jara sends the rebound out for a corner-kick which subsequently comes to nothing.

7' Chile all over Cameroon in the early exchanges with the West Africans lucky not to be a goal down. Good cover defending bailing them out on a good few occasions already.

1' POST! Vargas rattles the woodwork in the opening minute of the match...Ondoa relieved to see the ball canon off the post, onto his boot and out for a corner-kick.

- Damir Skomina of Slovenia takes charge of the clash.

- The two teams have only met on one previous occasion, in France 19 years ago at the 1998 World Cup. That particular encounter ended in a 1-1 stalemate with the African's ending the clash with 9 men!

- The two teams making their way onto the pitch, national anthems to follow as the African champions take on the South American champions!

- No Claudio Bravo or Alexis Sanchez for Chile this evening, both ruled out due to injury.