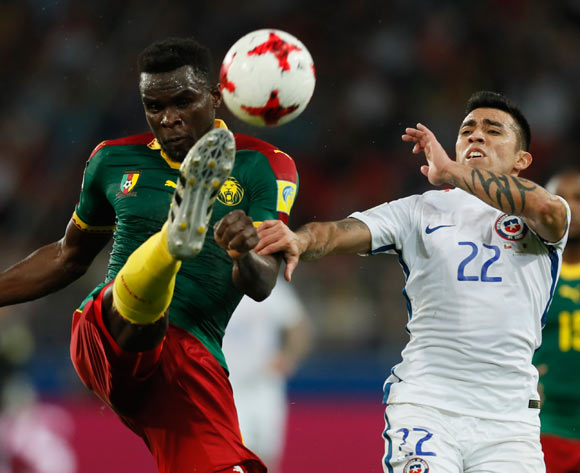 epa06035881 Michael Ngadeu-Ngadjui (L) of Cameroon and Edson Puch of Chile in action during the FIFA Confederations Cup 2017 group B soccer match between Cameroon and Chile at the Spartak Stadium in Moscow, Russia, 18 June 2017. EPA/YURI KOCHETKOV

Late goals from Arturo Vidal and Eduardo Vargas guided Chile to a 2-0 win over Cameroon in their Group B 2017 FIFA Confederations Cup opener at the Otkrytiye Arena in the Russian capital of Moscow on Sunday evening.

The South American champions stated their intent from the onset as Vargas rattled the post in the opening minute. Fabrice Ondoa lucky to see the ball canon off the woodwork, onto his boot and out for a corner-kick.

Desperate defending, garnished with a bit of luck, safely navigated the Indomitable Lions through the early exchanges before Vincent Aboubakar went close in the 11th minute.

The burly forward denied by Johnny Herrera who stood in for the injured Claudio Bravo between the sticks.

Ondoa was unbelievable for the AFCON holders as he denied Jean Beausejour and José Pedro Fuenzalida in quick succession.

Vargas, though, would have the beating of the Cameroon goal-minder on the cusp of half-time, but the goal would be chalked off following word from the video assistant.

The second stanza was a lot more cagey, but Cameroon continued to find it difficult against a La Roja side on constant attack.

Mauricio Isla sending his header attempt wide with the goal at his mercy, but Chile would not be denied as Vidal rattled home his 23rd international goal in the 81st minute of the game.

The German-based midfielder heading past Ondoa following a pin-point cross from Arsenal forward Alexis Sanchez, who started the game on the bench following an ankle knock.

Sanchez was involved once more as Vargas made sure of all three points in the first minute of stoppage-time - leaving Cameroon with a mountain to climb in their remaining group matches against Australia and Germany.