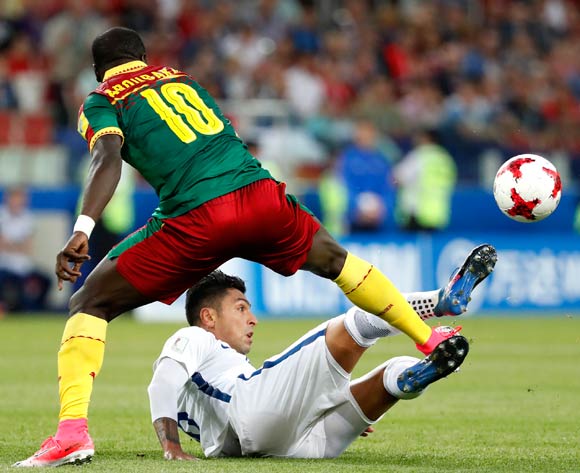 Vincent Aboubakar (L) of Cameroon and Eduardo Vargas of Chile in action during the FIFA Confederations Cup 2017 group B soccer match between Cameroon and Chile at the Spartak Stadium in Moscow, Russia, 18 June 2017. EPA/SERGEI ILNITSKY

Welcome to our live coverage of the 2017 FIFA Confederations Cup Group B clash between Cameroon and Australia from the Krestovsky Stadium in Saint Petersburg, Russia, on Thursday, 22 June 2017.

90+4' Full-Time: Cameroon 1-1 Australia - Both still in it, but will have to beat Chile and Germany respectively in their final group game to have a chance of reaching the knockout stages!

90+1' Late pressure by Australia as we head into three minutes of added time. Will there be another late goal in Russia?

85' Aboubakar again on the end of a pin-point cross into the area, but he sends his volley wide of goal!

83' Into the final exchanges we go and both teams not willing to give an inch! Hugo Broos again reluctant to make changes while the Socceroos have already exercised their quota. Former Everton man Tim Cahill on for his 99th appearance.

72' This game can go either way as it stands! Cameroon will really be kicking themselves having failed to double their lead minutes before the Socceroos pulled level.

65' Another chance for Aboubakar, but again the burly forward fails to hit the target!

60' GOAL! Milligan converts from the spot following a foul on Gersbach inside the area. Video Assistant confirmed that is was a certain spot-kick and the Socceroos are level.

57' GLARING MISS! With the goal at his mercy, Aboubakar fails to hit the target! That should have been 2-0.

55' Desperate defending by the African champions following a flowing move by Australia. The Socceroos playing all the football in the early exchanges of the second stanza.

47' Early chance for Juric who is picked out by Leckie, but the towering forward can only succeed in seeing his resulting shot well over from close range.

46' Second half has kicked-off in Saint Petersburg.

45+1' GOAL! Anguissa strikes on the stroke of half-time. The midfielder with a clever finish following a long ball from the back - chipping the ball over the onrushing Ryan with virtually the final kick of the half.

45' Cameroon with all the possession and territory in the closing stages - the Aussies happy to sit back and hit on the counter as we enter one minute of added time...

40' Four successive corner-kicks for Cameroon come to nothing - good defending by Australia who are eager not to lose sight of the burly Indomitable Lions.

33' Moment of panic in the Cameroon penalty area, but Ondoa recovers and ultimately grabs hold of the ball.

30' Half-hour played and we are yet to see a goal in Saint Petersburg. The Indomitable Lions been the more dominant team thus far.

25' Corner-kick for Cameroon in what has been a tightly contested tussle thus far. Moukandjo whips it in... cleared by Leckie! Reloaded by Djoum but his cross is also cleared from danger.

20' Gersbach fizzes the ball into a dangerous area from the left flank, but Ondoa is aware of the danger and makes a diving interception.

14' Another free-kick for the Indomitable Lions -  Aboubakar has pulled rank and he will take it but his attempt is straight into the wall. Siani's resulting shot from the rebound flies well over.

7' CHANCE! Free-kick for Cameroon in a good position... Moukandjo whips it in but Australia clear! Only for a second as the ball falls to Aboubaker - he rattles his resulting shot into the side-netting.

3' Kruse bursts into the area before seeing his left-footed shot straight at Ondoa who makes an easy save.

- Cameroon unchanged from their defeat to Chile, Australia make two changes for what is a must win game for both teams.