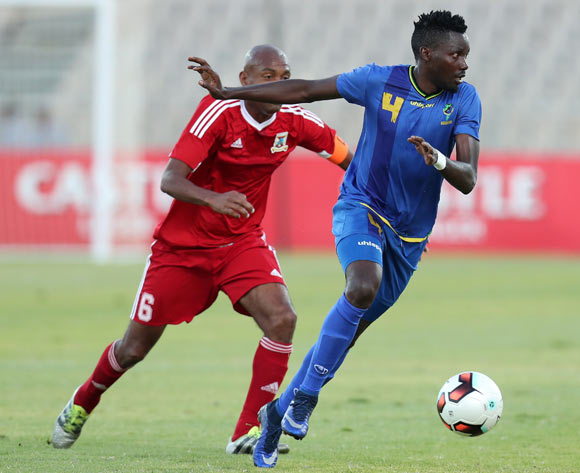 Erasto Edward Nyoni of Tanzania challenged by Peter Colin Bell of Mauritius during the 2017 Cosafa Castle Cup match between Tanzania and Mauritius at the Moruleng Stadium, Rustenburg South Africa on 29 June 2017 ©Muzi Ntombela/BackpagePix

Defending Cosafa Cup champions South Africa will enter the 2017 edition of the competition when they face Tanzania in the quarterfinals on Sunday. The match is set for the Royal Bafokeng Stadium, kick-off at 17h00 CAT.

South Africa claimed their fourth Cosafa Cup title by winning the 2016 edition in Namibia, trumping Lesotho, Swaziland and Botswana in the quarters, semis and final respectively.

Bafana Bafana are without most of their big-name stars, but have still been able to select a strong squad, with new coach Stuart Baxter hoping to grow the national team’s player pool in this lower-profile tournament.

“We have picked a team for the COSAFA CUP with an average age of 22.6 [years] with some of the younger interesting players from the base of the U-20 national team that went to the World Cup in Korea,” explained Baxter.

“That way, we will make sure that the young talent is nurtured from a young age until they graduate into the senior national team. That is how we intend to reinforce the Vision 2022 blueprint.”

Tanzania, who are invitees to this Southern African championship, earned their spot in the last eight by finishing top of Group A. It’s a much improved performance from their last appearance in 2015, when they lost all three group matches.

The Taifa Stars’ key result this time around was a 2-0 win over Malawi in their opening match last weekend, with Shiza Kichuya’s brace proving decisive. The East Africans went on to record draws with Angola (0-0) and Mauritius (1-1), which proved enough for them to finish top of the pool.

South Africa and Tanzania have met in just two previous international matches, both friendlies: the former claimed a 1-0 win in the teams’ last meeting in Dar Es Salaam in May 2011, while their first match was a 1-1 draw in the same city in October 2002.