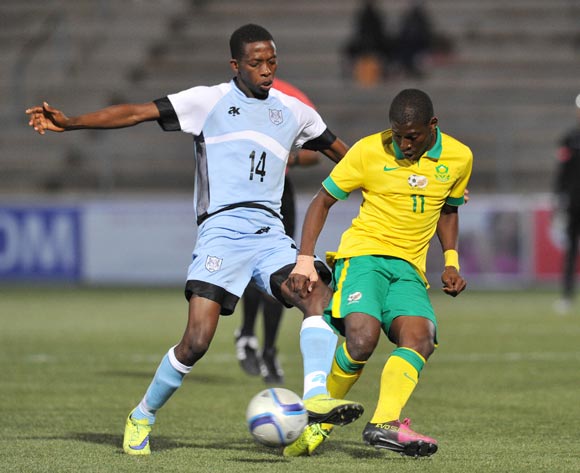 Maphosa Modiba of South Africa challenged by Thabang Sesinyi of Botswana during the 2016 Cosafa Cup Final match between South Africa and Botswana at Sam Nujoma Stadium in Windhoek Namibia on 25 June, 2016 ©Muzi Ntombela/BackpagePix

South Africa will face Botswana in the 2017 COSAFA Cup plate semi-final match at the Moruleng Stadium in Moruleng, South Africa on Tuesday.

Bafana Bafana were narrowly defeated 1-0 by Tanzania in their quarter-final match at the Royal Bafokeng Stadium in Rustenburg on Saturday.

The tournament hosts, who won this competition last year in Namibia, will now look to reach the plate final.

Meanwhile, Botswana were edged out 2-1 by Zambia in their quarter-final encounter at the Royal Bafokeng Stadium on Saturday.

The Zebras reached last year's tournament final, but this year they be keen to at least qualify for the plate final.

Oris Radipotsane, the Botswana coach, will look to Mpho Kgaswane to inspire the Zebras to victory over South Africa.

The winner between South Africa and Botswana will face Namibia or Swaziland in the plate final on Friday.