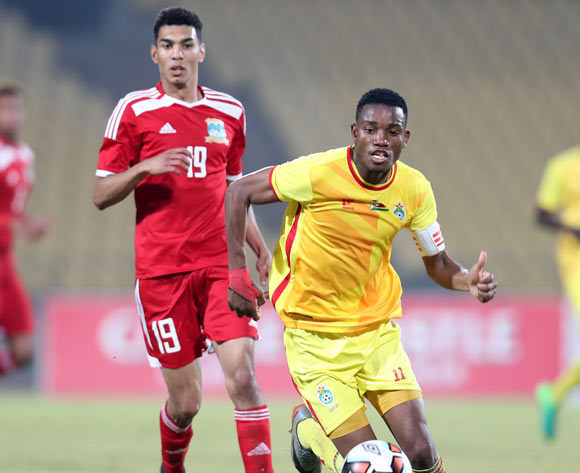 Ovidy Karuru of Zimbabwe challenged by Carl Hopprich of Seychelles during the 2017 Cosafa Castle Cup match between Zimbabwe and Seychelles at the Royal Bafokeng Stadium, Rustenburg South Africa on 30 June 2017 ©Muzi Ntombela/BackpagePix

Zimbabwe attacker Ovidy Karuru has been given special praise by national team coach Sunday Chidzambwa for his performances at the 2017 Cosafa Cup in South Africa.

The 28-year-old former Kaizer Chiefs player has netted six times at the Southern African regional tournament, helping the Warriors reach the semifinals, where they will face Lesotho on Wednesday evening.

Karuru’s latest goal arrived in the 2-1 win over Swaziland in the quarterfinals on Sunday evening, but it was his overall performance and adaptability which impressed Chidzambwa the most.

“Karuru is a very talented player who is able to play in so many positions. We can use him as a wide midfielder, behind the strikers or even as a striker because he is also very good in front of goal,” explained the Zimbabwe coach.

“I think we played very well in the first half and had the game under control. We could have easily scored three or four goals.

“But we started the second half badly and gave away a very easy goal that was a result of some poor positional play by one of the central defenders.

“We then made tactical changes to push Ovidy more upfront and we then regained control of the game and from one of the many corners and free kicks we forced, our dead-ball specialist Ocean [Mushure] sent a cross which Knox [Mutizwa] headed in.”

Karuru will be at the heart of Zimbabwe’s attack again when they battle Likuena in the semis at Moruleng Stadium on 5 July, kick-off at 19h30 CAT.