Al Ahli Tripoli knock Zamalek out of the Champions League 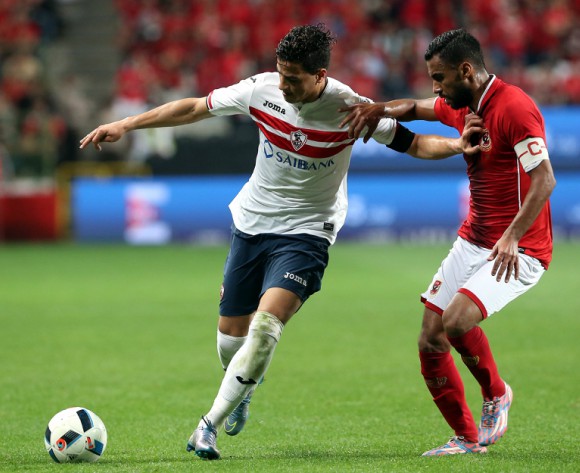 Libyan club Al Ahli Tripoli has knocked Zamalek out of the CAF Champions League after holding the Egyptians to a 2-2 draw on Sunday night.

The result at the Borg El Arab Stadium saw the White Knights finish third on the Group B standing behind USM Alger and their Libyan opponents.

The Egyptians got off to a perfect start, with Basem Morsi opening the scoring in the 13th minute and putting them on course for the quarterfinals.

However, the Al Ahli gained a foothold in the game and fought their way back into the match to head into the break level at 1-1.

Tripoli’s equalising goal was a major flash point in the game, as defender Mahmoud Hamdi received his second yellow card in giving away a penalty in injury time before the interval.

The Zamalek man was sent off and Al Ahli’s Anis Mohamed Saltou scored from the spot to make it a double blow for the White Knights.

The hosts made two changes at the start of the second half - sending on Mostafa Fathi and Mohamed Magdy - and had used their third and final substitution to take off Shikabala and throw on Stanley Ohawuchi by the 66th minute.

Yet it was Tripoli, with a man’s advantage, who made the next major stride forward in the game as they went ahead 2-1 thanks to a 69th minute goal from Central African Republic midfielder Vianney Mabide.

The White Knights fought back in the 75th minute, with Maarouf Yousef making it 2-2 to give his side a glimmer of hope despite their numerical disadvantage.

Yet there was to be no miracle finish for Zamalek, who couldn’t find a winning goal in what remained of the match.

The other Group C match in Algeria saw USMA defeat CAPS United to seal top spot. They will face Mozambique’s Ferroviario Beira in the quarterfinals, while Tripoli will battle Etoile du Sahel.