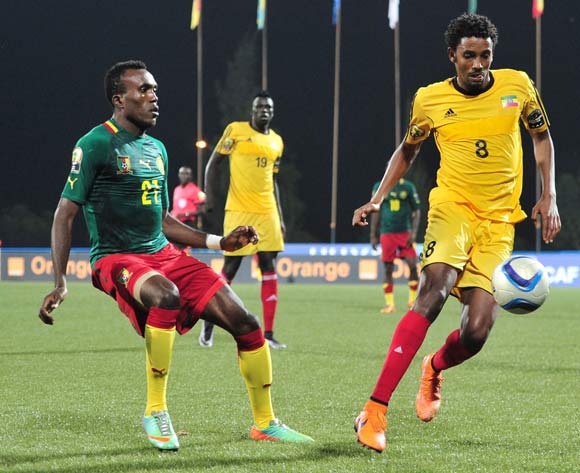 Asrat Gobena of Ethiopia challenged by Carlain Manga Mba of Cameroon during the 2016 CHAN Rwanda, match between Cameroon and Ethiopia at the Huye Stadium in Butare, Rwanda on 21 January 2016 ©Muzi Ntombela/BackpagePix

Ethiopia, known as the Wayla Antelopes, have qualified for the last two CHAN tournaments in 2014 and 2016, exiting both in the group stage. They will be aiming for a hat-trick of successful qualification campaigns.

The Wayla Antelopes were last in action in the 2019 Africa Cup of Nations qualifiers last month, suffering a heavy 5-0 defeat at the hands of West African giants Ghana.

Djibouti, known as the Shoremen of the Red Sea, have never qualified for the CHAN, with their attempt to reach the last edition in 2016 ending in the preliminary round when they were beaten 4-1 on aggregate by Burundi.

The minnows have not been in action since they were beaten 6-0 by in the second leg of a 2019 AFCON qualifying tie by South Sudan back in March.

Ethiopia have won all four of the teams’ previous meetings, according to FIFA statistics. Their last clash was in Nairobi in November 2009, with the Wayla Antelopes claiming a 5-0 win.

The return leg will be held in Awasa next weekend. The aggregate winners will face Burundi in the third round.