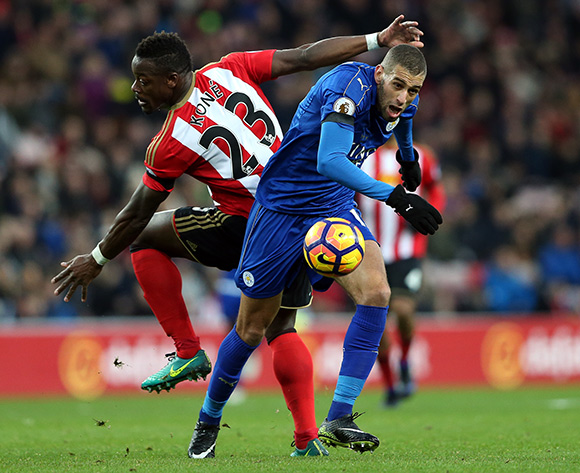 Leicester City's Islam Slimani (right) battles for the ball with Sunderland's Lamine Kone (left) during the Premier League match at the Stadium of Light, Sunderland.

This is despite having sustained a deep cut behind his knee during City's 1-0 defeat to fellow English side Wolverhampton Wanderers in a friendly match on Saturday.

Leicester City assistant coach, Mike Stowell says they are hopeful that the 29-year-old hitman will be ready for their clash with English outfit Burton.

“It was a very nasty cut,” Stowell told Leicester Mercury.

“It was a freak accident and the blade of the boot has cut him right at the back of his knee.

“There was no way he was going back out there so he had to be stitched up in the dressing room," he added.

“Hopefully, he’ll be back out there against Burton.”

Slimani and his City teammates are scheduled to face Arsenal in their first 2017/18 English Premier League game on Friday, 11 August 2017.