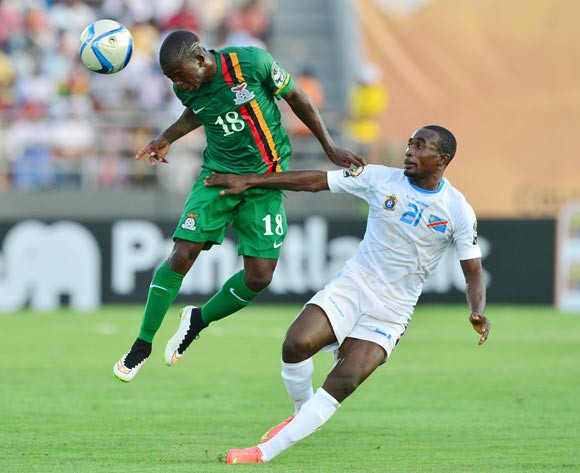 Emmanuel Mbola of Zambia heads ball away from Firmin Ndombe Mubele of DR Congo during the 2015 Africa Cup of Nations football match between Zambia and DR Congo at the Ebibeyin Stadium, Ebibeyin, Equatorial Guinea on 18 January 2015

DR Congo international Firmin Ndombe Mubele believes that his French Ligue 1 club Stade Rennais will do well during the 2017/18 season.

The 23-year-old striker and his Rennais teammates will face Troyes in their first league game at the Stade de l'Aube on Saturday.

Mubele spoke to the club's official website about their pre-season preparations and his combination with Rennais' new signing Ismaila Sarr, the Senegal international.

Firmin, you have made an impression with your great physical form...

The preparation went very well, we worked well. We are ready to defend the colors of Stade Rennais as of Saturday. We had difficult preparations but we have to bear it if we want to start the championship well. You have to be physically focused. Personally, I feel very fit.

And mentally, are you prepared for the Saturday's game?

Yes I am good. All batteries are recharged. It is from Saturday that I will judge, see if my adaptation is complete and judge my level. But it does not matter if I score, as long as you win. What we all want is good collective performance. The target is to collect the three points on Saturday before confidently approaching the two consecutive home games (Lyon and Dijon) in front of our supporters at Roazhon Park.

Six months after your arrival, you feel very comfortable in the locker room!

To feel good on the ground, you have to know how to live with the people around you. I get along with everyone, the players and the staff. In Switzerland and Carnac, there were good cohesion courses. The boat trip in the Gulf of Morbihan is one of those moments where you can release the pressure and share nice moments.

Are there ambitions you have set for yourself at the beginning of the season?

Personally, I do not set limits. With the work of the coach, we can do something good this season, and it must start on Saturday with a victory. You have to take the right wagon at the beginning of the championship. The Ligue 1 may have strengthened this summer but it will realize that it will not be easy to play against Rennes.

Ismaila Sarr has joined you in the team's attack. How is your combination?

It's easy to play with him. It does not take long to see how he plays. Automations will come quickly. Each one will play on the qualities of the other. This is the goal of the associations in the field, I know that with such and such I can play on his power, another on his taking of spaces ... With Giovanni, it was already going well. Ismaila Sarr has a lot of talent and I think he's going to improve with us.