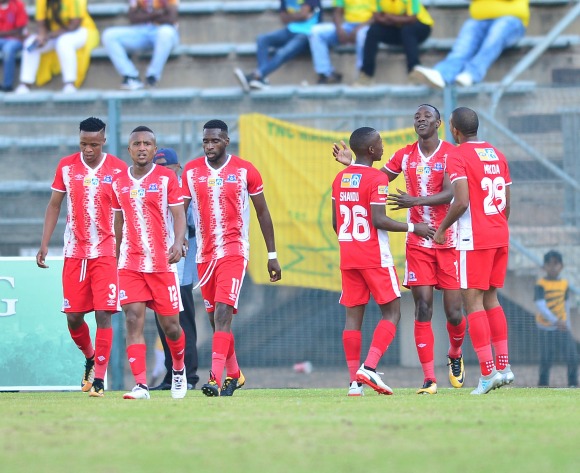 Maritzburg United edged out Mamelodi Sundowns 1-0 in the 2017 MTN8 Cup quarter-final match at the Lucas Moripe Stadium on Sunday.

As a result, the Team of Choice advance to the semi-finals where they will take on SuperSport United, while the Brazilians are out of the tournament.

Both keepers had a busy first-half as Sundowns full-back Tebogo Langerman forced Mpandle into a good save from range in the 39th minute.

Zambia international Mweene then denied Maboe for the second time on the stroke of half-time and the score was 0-0 at the interval.

The deadlock was finally broken 13 minutes into the second-half after the Sundowns defence was exposed with the hosts had attacked in numbers.

Zimbabwe international Evans Rusike hit the back of the net to make it 1-0 to Maritzburg with Siphesihle Ndlovu grabbing an assist.

Then it was wave after wave as Sundowns looked to level matters with Khama Billiat missing the target with a powerful header in the 63th minute.

Mpandle, the Maritzburg keeper, made a great finger-tipping save to deny Sundowns captain and midfielder Hlompho Kekana with three minutes left on the clock.

Nevertheless, the visitors were solid at the back in the closing stages of the match and ultimately, Maritzburg ran out 1-0 winners.